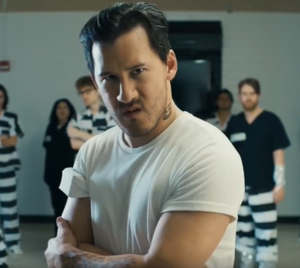 Yancy is one of the prisoners at Happy Trails Penitentiary. He was arrested after killing both of his parents, but discovered he enjoyed life in the prison.

He meets The Player shortly after they and Mark decide to try and rally the prisons for a break out, though Mark is sealed within a wall before he can meet Yancy. Instead, Yancy treats the Player to a music number about the wonders of living within prison, leading to either helping the Player escape, killing them in a dance battle, or convincing the Player to live in the prison.

Powers and Abilities: Superhuman Physical Characteristics, Broadway Force and Reality Warping (Can initiate a musical number, slightly warping reality as fits to the music, including teleporting around the prison complex or creating canes/top hats), Fourth Wall Awareness (Can turn fights into a Punch Out style or Dance Dance style match), Healing (Succeeding his side of a Dance Dance style battle heals him), Stealth Mastery (Escaped from solitary, then snuck into the Warden’s Office and got into T/N’s cell, all in an incredibly short time), Social Influencing (Convinced the Player to live in prison in one timeline), Preparation (Knows pretty much everything about the prison he lives in)

Attack Potency: Wall level (Could beat T/N to death with dance, whom was unharmed by Captain Longleg's jump, Cracked a stage simple by jumping)

Speed: Hypersonic reaction speeds (Can keep up with T/N)

Durability: Wall level (Took several strikes from T/N with only a few scars)

Intelligence: Above Average (Is the leader of the prisoners of Happy Trails Penitentiary, Knows pretty much everything about the prison he lives in)

Feats: Killed his parents, Is the leader of the prisoners