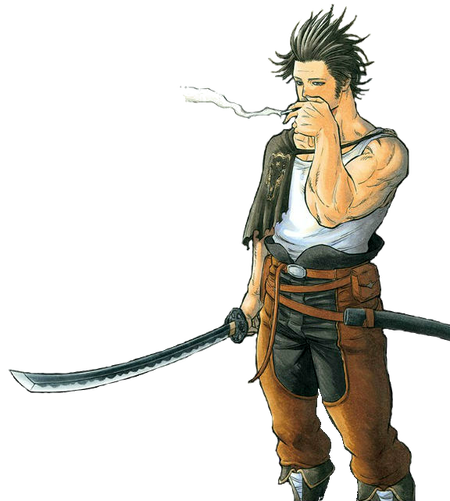 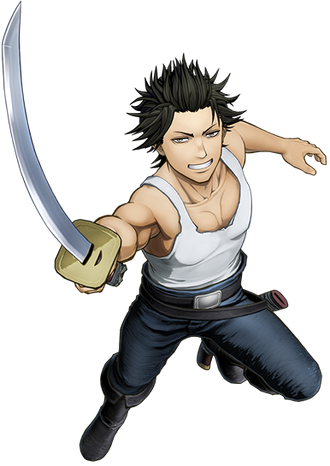 Yami Sukehiro is the Captain of the Black Bulls, a squad of the Clover Kingdom's Magic Knights. A foreigner from "the Land of the Rising Sun" who washed up on the kingdom's shores after his boat capsized, Yami is uncouth, hypocritical, and prone to delivering death threats at the slightest provocation. Nevertheless, he is a powerful and well-respected sorcerer who was able to recognize Asta's merits when none of the other Captains would.

Age: 28 (Recruited by Julius Novachrono himself while Yami was still a teenager)

Powers and Abilities: Superhuman Physical Characteristics, Acrobatics, Darkness Manipulation (Can cover his katana with Dark Magic to create slashes made of darkness. Dark Magic passively absorbs Light), Magic, Aura (By releasing his mana, he can create an intense pressure in his surroundings), Extrasensory Perception, Accelerated Development (Constantly keeps learning new things and breaks his own limits during every battle), Master Swordsman, Statistics Amplification (Can augment his physical abilities even further with his magic), Ki Sensing (Can detect the Ki, otherwise known as life energy, and killing intent of others in order to locate them and dodge their attacks, mainly used as Precognition. Far greater Precognition when he combines it with Mana Zone, He can react to his opponents' movements before they make them similar to Julius's Precognition), Spatial Manipulation via Mana Zone and Dark Cloaked Dimension Slash, Magic Absorption/Limited Paralysis Inducement via Black Hole/Black Moon (It can shortly paralyze someone if they are somehow in contact with their spell and Black Moon expands the range and area of the absorption.), Forcefield Creation (Can create a forcefield made of dark magic), True Flight (With a broom), Pressure Points (Can easily knock a person out with Dark Cloaked Avidya Blunt Strike), Resistance to Heat Manipulation (Via Mana Skin), and Limited to Gravity Manipulation via Mana Skin, (He remains standing under the immense pressure of Dante's devil-amplified Gravity Magic).

Lifting Strength: Superhuman (Casually lifts Asta and threatens to crush his skull with one hand. Was stated by Tabata to be stronger physically than Asta, and physically strongest character in the series so far), higher with Reinforcement Magic (Reinforcement Magic was stated by Tabata to increase the physical capabilities of the user even without much in the way of muscle in the same scan)

Stamina: Incredibly high, fought against the Eye of the Midnight Sun's Leader with ease while protecting Asta and instructing him in the midst of combat, continuously using his powerful and unique Dark Magic without getting tired and is only incapacitated after being attacked by the Third Eye, composed of Fana, Raia and Vetto with magical power exceeding a Magic Knight Captain's but was able to return to the fight soon after being rescued by his fellow Captains

Intelligence: Despite being somewhat bull-headed, reckless, and uncouth, Yami is an experienced and perceptive warrior, picking apart his opponent's strategies with a glance and is constantly trying to come up with counters for them. He is a master swordsman who can seamlessly blend his magic with his swordplay, pressuring Patry with nothing but his Dark Magic-enhanced swordsmanship. He is a capable teacher, instructing Asta on how to use Ki during battle, and is capable of countering the majority of Patry's powerful Light Magic spells by utilizing the properties of his Dark Magic. He is also free of prejudices, acknowledging Asta's unique abilities and does not underestimate foes in a fight, going full-on from the moment he is able

Weaknesses: He is somewhat reckless and believes heavily in stereotypical action hero tropes, such as a heroic second wind and awakening one's "hidden power" through life or death situations, which sometimes, actually works. His katana, while finely made, is far from indestructible

Dark Magic: Yami's magic allows him to manipulate darkness. He primarily uses this magic to increase his physical abilities and channels it into his sword, creating destructive arcs of dark energy that are powerful enough to counter Licht's Light Magic spells. It is a rare and unique magic that was recognized by the Sorcery Emperor himself.

Ki: Having been raised in the Eastern lands, Yami can read the natural energy given off by human beings to predict their next attacks, granting him a pseudo-sixth sense for danger and enhancing his reaction speed.

Reinforcement Magic: Yami uses this magic to increase his physical abilities, such as speed, defense and attack force.

Restraining Magic: Is a form of magic that allows the users to immobilize their opponents.

Finral warps Back Yami and Jack 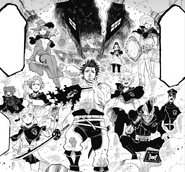 Black Bulls barging into the Courthouse