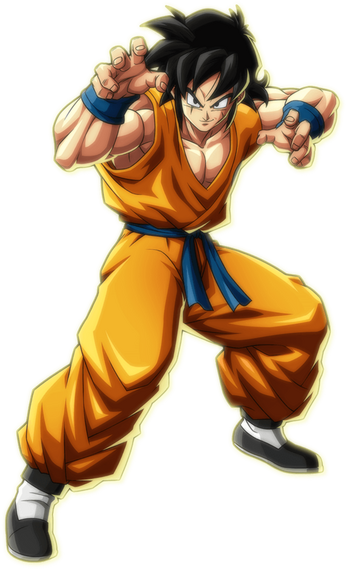 A former desert bandit, Yamcha was once an enemy of Goku, but quickly reformed and became a lifelong friend and ally. Brave, boastful and dependable, Yamcha is a very talented martial artist and one of the most gifted Humans on Earth, possessing skills and traits that allow him to fight alongside his fellow Z Fighters when major threats loom. However, by the latter half of Dragon Ball Z, he is largely outclassed by both his allies and their enemies, and thus retires from fighting.

Age: 47 during the Universe 6 Saga

Attack Potency: Wall level (Punched Goku through several pillars and knocked Chi-Chi out) | Small Building level (Below Goku and Krillin at the time) | City Block level (Should be no weaker than Tao Pai Pai) | At least City level+, likely Mountain level (Should be not that weaker than Krillin and Tien. Despite suffering a crushing defeat from Kami, the latter praised his technique) | Planet level (Easily beat a Saibamen, though was killed by its Self-Destruct after letting his guard down) | Planet level (His power grew enough that Dr. Gero and Android 19, who had knowledge of Goku's power during his battle with Vegeta, believed Yamcha to be Goku)

Intelligence: Quite high considering he was able to live in one of the deadliest deserts in Dragon Ball

Weaknesses: Yamcha can't survive in the vacuum of space, and is both quite cocky and arrogant which Word of God states led to his death during the battle with the Saiyans