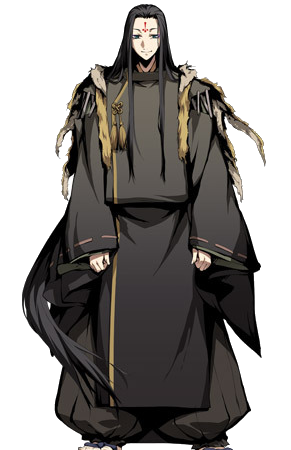 Yakou Madara is an Onmyōji created by Ryuusui through her Taikyoku. He joined the Eastern Expedition, which was ordered by its country to take back the Eastern Land from the Yatsukahagi. For him, this quest is a way to search for his own desire, which he learns during his encounter against Ootake.

The fall of the Tenma will allow Hajun to complete his Law without opposition and would thus erase all of existence. Yakou, having learned of the history of the Old World and the battle between the Guardians of the Fifth Heaven, rejoins his old comrades to stop Hajun and put an end to his reign.

Age: 14 years old (Was created by Ryuusui a few years prior to the main story)

Powers and Abilities: Superhuman Physical Characteristics, Magic, Flight, Reality Warping (Can alter his own hierarchy of existence as he deems fit. Making it lower or higher to the point he could interact with and reach realms beyond dimensions such as the Throne, which he can manipulate and interfere with, and Singularity, a "colorless" place created from the clash of Hadou Gods Laws existing outside the Throne's authority and where shades of previous Hadous reside), Immortality (Types 1, 3 and 9. His true self exists in the Throne in which only Gods are capable of reaching. Existing in the deepest layer of the World beneath the Singularity, from which shades of previous Hadou Gods exists), Regeneration (Unknown), Lightning Manipulation (Can create lightning redirecting ritual in an instant, allowing him to reflect back lightning attacks to his enemies), Time Manipulation, Soul Manipulation (Can adjust his own soul to become more powerful, see the souls of others and their "colors" and attack his targets souls directly), Gravity Manipulation, Summoning (Can summon his Shikigamis including Niko and Teirei), Mind Manipulation (Can create a world inside the mind of his targets), Sleep Manipulation (Can knockout his targets by uttering a single word), Cosmic Awareness and Precognition/Clairvoyance through Tengan (Can see into the futures infinite possibilites across all of creation, and are superior to that of Ryuusui's vision. After gaining his Third Eye, he is capable of percieving higher order domains such as the Throne), Conceptual Manipulation (Can manipulate concepts via Kotodama), Barrier Creation (Said barriers can work in up to 24 dimensions, he also has Uho-hou a passive barrier that adapts to spirits and concepts and as such can influence territories like higher dimensional spiritual defenses and its special nature resides in eliminating weakness points) and Attack Reflection (Said barrier will change the direction of any attack in their blind spots ensuring their safety. Yakou can also reflect incoming attacks with his Dimensional Barriers), Teleportation, Space-Time Manipulation (Can embody Space and Time to stop incoming attacks), Can travel through dimensions, Power Nullification (Can prevent attacks by using his connection to the Throne), Pocket Reality Manipulation (Can create pocket spaces for various uses), Creation (Can create Shikigamis), Void Manipulation, Resistance to Magic, Mental (Resisted the wave of Mercury which can affect one's thoughts. Even when going further in the Singularity, he can still keep his sense of self with his will alone even after "falling deeper" in the colorless realm), Spiritual (His own soul could take on the shades of Hadou Gods without being overwhelmed. Can adjust his own soul to resist effects that could negatively impact him such as the Throne and the Singularity), Spatial (Could block Tenma Morei fire attacks which are capable of destroying space), Conceptual attacks, Time Stop (Even when Tenma Yato activated his Law to freeze the remains of Marie's world, Yakou could still act inside), Power Nullification (Should have no problem using his abilities in the presence of Tenma Sukuna) Durability Negation | All previous abilities in addition to Immortality (Type 10), Law Manipulation (Any God has their own Law with its own function. Taiyoku also allows its user to warp already existing laws as they see), Death Manipulation (Capable of even negating immortality, all forms of death are subservient to him.), Conceptual Manipulation (Type 1; Taikyoku users can manipulate, destroy and create concepts. Could kill his own concept of death with his Law, and weaker gods such as Akuro could poison concepts such as the concept of infinite possibilities), Acausality (Type 5), Causality Manipulation, Space-Time Manipulation, Regeneration (High-Godly; can regenerate from conceptual destruction; came back from Tenma Ootake's erasure), Information Manipulation, Matter Manipulation, Teleportation, Telepathy, Telekinesis, Resurrection (Can kill his own concept of death and thus come back to life), Abstract Existence (Type 1; Each God embody their own Law), Non-Corporeal, Nigh-Omniscience, Nigh-Omnipresence (Omnipresent in his own territory), Beyond-Dimensional Existence (Type 1).

Attack Potency: Varies, Universe level (Has complete control over the movement of stars and is equal to Reinhard Heydrich) to Outerverse level+ (He can raise the height of his existence to the point of being able to interact with and reach realms such as the Throne, which he can manipulate and interfere with, and the Singularity, a "Colorless" space created by the clash of Hadou Gods Laws existing outside the Throne's authority and where shades of previous Hadous reside). High Outerverse level with Summons (His strongest shikigamis, in their Silver Wolf form, can battle Tenma Akuro and Tenma Morei when the latter both had their Taikyoku active and later killed Tenma Numahime at the cost of its life) can bypass durability in a number of ways | High Outerverse level (As a Gudou God, Yakou exists completely above and external to all expansions of the Singularity - of which size corresponds to the inner depth of the Throne God, reaching up to infinite levels each transcending the last - which in turn utterly transcends the Multiverse, no matter the qualitative dimensions/layers it may have. To even the weakest God with 1 Taikyoku, an object that governs All Of Creation such as the Throne is nothing more than a tool. Additionally, along with Rindou and Habaki, Yakou is one of the strongest Gudou Gods, with a Taikyoku value of 65. Could fight equally against Tenma Ootake)

Speed: Varies, At least FTL, likely FTL+ (Comparable to Reinhard), up to Irrelevant (Can raise his existence to move through The Singularity and reach The Throne). | Nigh-Omnipresent normally, Omnipresent in his own territory

Stamina: Limitless (His power is none other than Taikyoku itself) | Limitless

Range: High Outerversal (Can reach and affect realms such as the Throne. Able to wander in the Singularity, place created through the clash of two Hadou Gods and only those with Taikyoku are capable of reaching it) | High Outerversal

Intelligence: Madara is very cunning and skilled in combat, and can make his foes draw their weapons and fight even if they know they can’t win. No one surpasses him in terms of knowledge, whether it be magic or nature of the world | Nigh-Omniscient

Weaknesses: Madara is blind (though his vision is compensated through his use of Taikyoku) and a lazy alcoholic. While he has Taikyoku, his value is technically “0” due to lacking a desire, and he thus lacks its benefits, save for the ability to control natural phenomena. | None notable