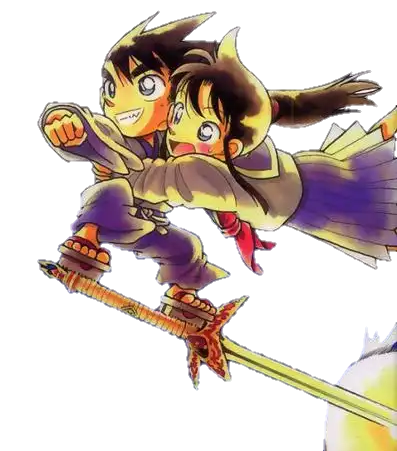 Yaiba Kurogane is the main protagonist of the manga Yaiba.

Raised in the jungle, he came to Japan with his father in a pineapple container transported to Tokyo. In Tokyo, he encountered Onimaru, who later wielded the Fuujin-ken (Wind God Sword) and became an oni with the intention to take over Japan. In order to stop Onimaru’s evil plan, Yaiba searched for the Raijin-ken (Lightning God Sword), the counterpart of the Fuujin Sword. During his adventures to stop Onimaru and to become the ultimate swordsman, Yaiba has faced against demons, anthropomorphic rabbits from the Moon, people from the Underworld and the Japan-sized Yamata no Orochi.

Age: 14 in Nobunaga Tournament Arc, 17 at the end of story

Speed: Subsonic (Equal to base Onimaru, who barely dodged an arrow at extremely close range) | Unknown, possibly Massively Hypersonic combat speed and Massively Hypersonic+ attack speed (Fought equally with Fuujin Onimaru, who dodged his lightning blast at close range) | Likely identical combat speed, but with slower attack speed | Unknown, likely identical to when he wielded Raijin-ken or higher | Unknown due to inconsistency. Either Massively Hypersonic+ (Sidestepped an attack that traveled between heads of the Japan-sized Orochi in less than 5 seconds and returned to his original position, making it look like the attack went through him) or FTL (Blocked attacks from Plasma, the Light Demon, while badly injured. He also dodged a beam that resembled light and was reflected by mirrors. Also reacted to Onimaru's Full-Moon Slash, which left Earth and flew to another moon in less than a minute) | Likely Supersonic+ (Dodged machine gun attacks)

Lifting Strength: At least Athletic human (Capable of carrying one tree trunk on his shoulder), likely higher as he gets stronger. Can also increase it significantly by turning into a giant

Durability: Athlete level | Unknown due to inconsistency. Had survived a blast from True Form Kaguya, but this is likely an outlier | Unknown | Unknown | Unknown, possibly Planet level at his peak (Took slashes from Onimaru's Maou-ken while the sword is fully-powered, meaning Maou-ken should be comparable to its counterpart Haou-ken, which Yaiba used to slice the Full-Moon Slash) | Small Building level

Intelligence: Skilled combatant but not high in everyday matters

Weaknesses: Yaiba is very cocky, and has normal human weaknesses | He goes berserk if he gets controlled by Raijin or Fuujin. He has overcome this, but can willingly let the deities take control of his body. He cannot use the Cross Slash without concentrating | The Big Orb has a time limit, and using it exhausts him greatly after. He is not immune to the Dark Orb's BFR ability | The Orb of Ryuujin has a time limit of 12 minutes | The energy state of the Haou-ken is dependent on his willpower, and disappears if he lacks said willpower | Normal human weaknesses

Note: Yaiba's speed is extremely inconsistent, as a case of Writers cannot do maths and the author's poor sense of scaling and perspectives. The author's sense of power scaling also made his durability nearly impossible to ascertain, as he has been portrayed to be injured by pretty much every opponent he fought.

1 of 4
Add photo
Raijin Sword (雷神剣): The sword of Raijin, the God of Thunder, it has been Yaiba's weapon of choice during most of the series.

Throughout his adventures in Japan, Yaiba finds several other orbs in search of the Dragon God's Orb:

Later this sword was merged in the Supreme King Sword.

Fujin Sword (風神剣): The sword of Fujin, the God of Wind, briefly used by Yaiba during his last fight against Kaguya when Onimaru discarded it. Later he used it again during the Pyramid Arc as his secondary weapon along with the Raijin Sword. Later it was merged in the Supreme King Sword.

Supreme King Sword (覇王剣): The legendary sword that once wielded by Susanoo to seal Yamata no Orochi inside Japan. In Pyramid arc, when Yaiba fought Jewel, Yaiba's Raijin-ken and Fūjin-ken changed their shapes into one sword, the Supreme King Sword. It is far stronger than Raijin-ken and Fūjin-ken. It changed the wielder's fighting powers into its power. At his top, the blade is replaced with one made of light.