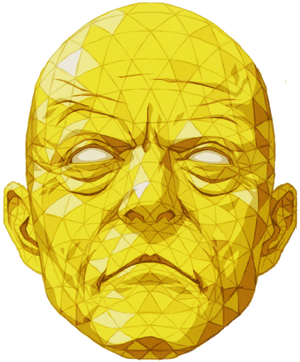 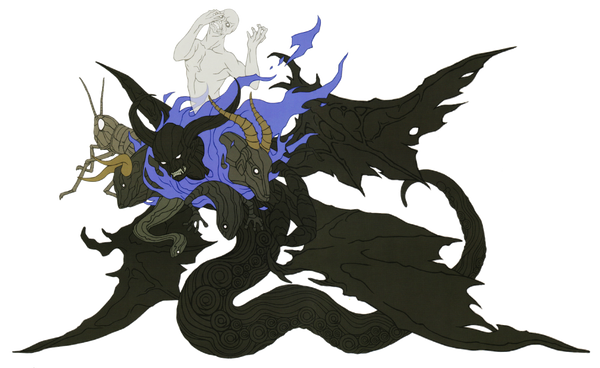 "The One True God of monotheism. The One True God worshipped in Judaism, Christianity and Islam. He is the Omnipotent Existence that created the Heavens and the Earth and made man in his own image, but this also means that together with the angels, his Avatars, he gave birth to demons. By giving humans bodies of flesh and bone, their lives and fears were repeated in the endless cycle of death and rebirth, restricting their range of observation."
— Shin Megami Tensei IV Apocalypse Artbook Profile

YHVH is the Hebrew god and the "true enemy" referred to by Lucifer throughout the Megami Tensei franchise. Once an avatar of the Great Will, he is the ruler of the Law Faction and the entire heavenly host, he seeks nothing more than to continue his tyrannic reign over the multiverse and dooming anyone who dares defy his will. Only the messiahs, select individuals chosen by the Great Will, can oppose him and free humanity from his iron grip.

Powers and Abilities: Superhuman Physical Characteristics, Higher-Dimensional Existence, Large Size (Type 10), Abstract Existence (Type 2), Immortality (Types 1, 3, 4, 8 and 9. Can return to The Axiom to reform indefinitely, and is likely reliant on his true self to some degree), Regeneration (High-Godly. Capable of regenerating after being erased from nonexistence alongside the entire multiverse across past, present and future), Acausality (Type 4; Demons are naturally born in a world beyond time and do not perceive it linearly, being completely unaffected by the collapse of the multiverse across past, present and future), Non-Corporeal (As a Demon, YHVH is not a physical being, and is a thought-form made of pure information and data), Reality Warping, Space-Time Manipulation (Demons far weaker than YHVH are capable of maintaining the existence of the very concept of time across infinity, and of overwriting universes and their past and future with new ones containing different laws. Scaling from Polaris, who is capable of rewinding and administrating time on a multiversal scale, affecting even voids of complete nothingness which consume concepts and ideas), Law Manipulation, Matter Manipulation, Soul Manipulation (Holds complete control over all souls across the infinite Multiverse created by him, and is capable of controlling their flow or reincarnating them after their destruction, as well as using them to override entire Multiverses with new ones), Life and Death Manipulation (Capable of instantly killing comparable enemies with Voice of God, bypassing all kinds of resistances and durability), Causality Manipulation, Fate Manipulation (Far superior to the likes of the Norns, whose influence over time and fate binds even Demons who exist beyond all of space and time), Information Manipulation, Power Nullification (Completely nullifies all statistics amplifications from all foes with Dekaja. Divine Harmony removes all beneficial status effects and effects, as well as all buffs and debuffs. Has a chance of inflicting the Mute status with Unending Curse), Conceptual Manipulation (Type 2; Scaling from lesser entities capable of administrating and manipulating all concepts that comprise the world, and define its past, present and future as if they were merely information on a computer program), Void Manipulation (Characters far weaker than YHVH can completely destroy beings of nothingness with nothing but normal attacks, and control the primordial void of nothingness that consumes and erases everything that comes in contact with it, even concepts and the Information that comprises reality on a fundamental level), Probability Manipulation, Energy Manipulation, Elemental Manipulation (Fire Attacks that pierce all resistances with Inferno of God, Ice Attacks that pierce all resistances with Hailstorm of God, Lightning Attacks that pierce all resistances with Lightning of God, Force Attacks that pierce all resistances with Tornado of God), Light Manipulation, Darkness Manipulation, Holy Manipulation, Telepathy, Telekinesis, Teleportation, Illusion Creation (YHVH can manipulate human observation to achieve full control over the observable universe, being capable of creating perfect copies of everything observed by humans, even beings such as Lucifer), Durability Negation (Can leave comparable enemies at the brink of death, bypassing all resistances), Shapeshifting, Size Manipulation, Cloning/Duplication, Statistics Amplification and Reduction (Can greatly increase his own statistics and lower the power of foes, being capable of turning someone stronger than him into his equal or a weakling. Can massively raise his statistics with Infinite Power while bestowing himself with Smirk, and can massively lower the opponents stats with Unending Curse), Resistance Negation (Can cast Almighty Attacks which bypass all magical defenses and innate resistances), Omnipresence, Nigh-Omniscience, Sealing (Sealed Mem Aleph and the Mother Goddesses), Healing (Can fully heal with Mediaharan. Satan, who was a mere aspect of his, was capable of instantly healing all of his wounds), Curse Manipulation, Invulnerability, and Existence Erasure with The Covenant, Resurrection Negation (Broke off Kazuya’s cycle of reincarnation from The Axiom), Resistance to Conceptual Manipulation

Attack Potency: At least Low Complex Multiverse level (Infinitely superior to vast amounts of Multiversal beings capable of reshaping and controlling Multiverses, and who immensely dwarf each other in power, holding even the likes of Lucifer and Satan as mere fragmented aspects of Himself, with the former being one that he has discarded and is capable of effortlessly defeating and sending to Hell for all eternity. Even the likes of Metatron and Yaldabaoth consider themselves to be mere fragments of a weakened YHVH, and even the immensely more power fusion between the two has stated that it has yet to reach the glory that it formerly held. Given YHVH's status as the established main threat of the Shin Megami Tensei franchise, and as a Omnipotent God who stands outside of the Multiverse itself, He shouldn't be inferior to beings such as Canopus) | Complex Multiverse level (Superior to an army of infinite equally powerful Base YHVHs. Capable of controlling all lesser gods and demons like puppets, and creating infinite equally powerful shadows of them at will. Likely 9th-Dimensional as he exists in YHVH-Space, a non-euclidean Universe beyond the totality of the Amala Network, which contains 4 Brane-Layers and his Throne's Layer, each being their own dimension, and described as being "More infinite and vaguer" than everything before them) | Complex Multiverse level (More powerful than his Full Form fighting casually, though weaker than what he used to be)

Speed: Omnipresent (YHVH is the embodiment of all Creation, holding it's entirety as an aspect of Himself and repeatedly comparing His own destruction to the destruction of the world itself. Exists eternally throughout all of Time simultaneously, and His current destruction is described as being merely "a blink of an eye" to beings like Him) | Omnipresent | Immeasurable (No longer one with existence)

Intelligence: Nigh-Omniscient (Sees absolutely everything that is occurring on every timeline / universe)