Yū Otosaka (乙坂 有宇, Otosaka Yū) is the male protagonist of the story, and a first-year transfer student. He uses his powers to cheat his way through school, but when his path crosses with Nao Tomori, the fate of all power-users is exposed.

He has the ability to temporarily possess a person for about 5 seconds. It is later revealed that he can steal the abilities of an ability-user he possesses. Towards the end of the series he becomes widely known (and feared) as the One-eyed Grim Reaper.

Powers and Abilities: Possession (For 5 seconds), Power Looting (Can steal abilities from someone else, though this is only for genetic abilities), Superhuman Durability | Same plus Pulverization, Permeation, Thoughtography/Projected Thermography, Telekinesis, Flight/Levitation, Time Rewind (Can go back to a certain moment), Collapse/Earthquake Generation (Limited to making things like buildings and others collapse while he is inside of them) | Same plus Superhuman Durability and Speed, Telepathy, Imperfect Invisibility, Fast Movement, Channeling/Spiritism (Can use his body as a medium), Pyrokinesis/Fire Manipulation, Telepathy, Power Detection, Freezing/Ice Manipulation, Disease Manipulation (Mostly acceleration of present and weak diseases), Barrier/Forcefield Generation, Healing/Regeneration (At least Low, likely Mid-Low. The original user only healed small cuts, although Yū claimed he could heal his eye back), Explosion Manipulation, Electricity Manipulation, Disintegration, Transmutation, Teleportation, Precognition (Non-combat useful), Self-Sustenance (Type 3), Enhanced Jumping, Omni-lingualism, Enhanced Vision, Wind Shards/Razor Wind, Matter Manipulation, Resistance to Fear Manipulation (Gained a power that caused him to lack fear) and tens of thousands of other abilities/powers that are yet to be disclosed.

Intelligence: Above Average (Despite being academically poor, Yuu seems to be rather smart in the use of his abilities, having good control of all of them)

Yū has the ability to take over someone's body for approximately 5 seconds. He often uses this power to view honors students during their exams to memorize and steal their answers. While in use, his irises becomes lime green and his pupils becomes light teal. However, his body slumps into unconsciousness while this ability is in use. Recently, it has also been discovered he can use other abilities whilst controlling their bodies. However, the five seconds time limit still applies. As of Episode 10, it is revealed Yū's true ability is "Plunder" which takes someone's ability away from them. It's unsure if he can give abilities back. He has the abilities of the people he possessed in the past who also had special abilities. It is shown that he can now use telekinesis to move or push and pull light objects, although it's not yet perfect. He might even be able to use thoughtography and be able to float in air, which is yet to be confirmed. He later uses Time-Leap to save Ayumi and uses telekinesis successfully to scare Konishi away. Although he has the ability to time leap, his right eye was damaged in episode 11, so he cannot time-leap anymore as the damage done was permanent. However, he managed to loot an ability that allows him to heal himself/others, implying that he can heal his right eye if he wants to. 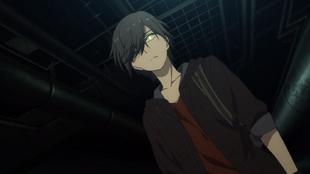 Yuu as the One Eyed Grim Reaper 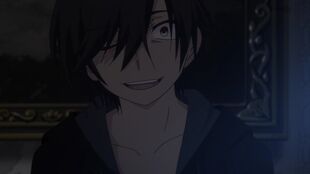