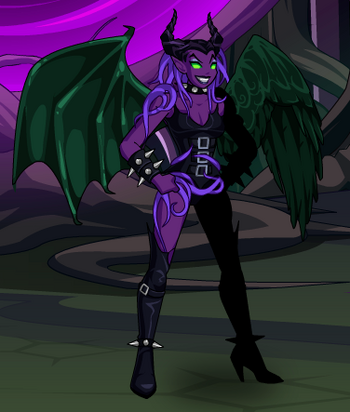 Chaos Lord Xiang is a fusion between Xang and a Chaorrupted Xing as well as Drakath's 2nd Lord/s of Chaos and the main antagonist of the Mirror Realm story-line. Originally, Xing and Xang represented "good" and "evil" and are responsible for the rationale behind all people's good or bad deeds. After Chaorruption, they still retain that status but also take on a secondary role of convincing select individuals to align with the forces of Chaos, claiming that Chaos is neither good nor evil. Though Xing and Xang were among the first individuals Chaorrupted by Drakath, their main role throughout the story-line were as advisers and they have yet become full-fledged Lords of Chaos until the defeat of Lionfang. Xiang is currently the only Chaos Lord other than the 13th Lord of Chaos who is/are still active as a Lord of Chaos, although Xiang currently has no interest in furthering Drakath's plans.

Powers and Abilities: Superhuman Physical Characteristics, Energy Manipulation, Immortality (Type 1), Magic, Healing, Mind Manipulation and Corruption via Chaorruption, Social Influencing (Xing and Xang are the spirits of Good and Evil that tempt others to perform either good or bad deeds), one-time Summoning (Can summon the Chaos Harpy), limited Body Control (Either evil Xing or good Xang can assert dominance over Xiang's body), Statistics Amplification, Statistics Reduction, Paralysis Inducement with Halt! (Also requires Xiang to be paralyzed at the same moment), Non-Physical Interaction. Resistance to some degree of Power Nullification (Chaos powers are unable to be removed or cancelled except by the Tears of the Mother)

Intelligence: Above Average. Extremely effect social influencer who is responsible for convincing Nythera, Krellenos, Iadoa, and Lionfang to side with Chaos despite their previously better judgement.

Weaknesses: Mentally unstable and possesses both a pacifistic and aggressive dual personality, often fights with herself as a result. Killing the Chaos Harpy will inflict major physical and mental harm to Xiang. The Tears of the Mother are able to remove one's Chaos powers.

Retrieved from "https://vsbattles.fandom.com/wiki/Xiang_(AEverse)?oldid=5386504"
Community content is available under CC-BY-SA unless otherwise noted.