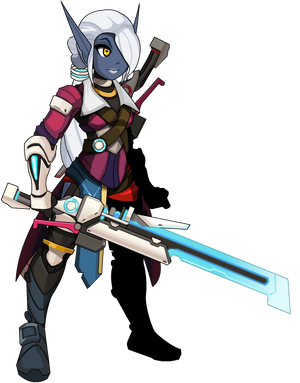 Xeven is the daughter of Chaos Lord Vath who is responsible for a large majority of the events leading up to the unleashing of the Vorefax. Her main goal was to assassinate the Hero of Lore, claiming that what the Hero is going to do in the future is something to horrible to disregard.

Tier: 10-A physically. Potentially Low 2-C with the Tachyon Blades

Powers and Abilities: Superhuman Physical Characteristics, Teleportation via Portal Creation, Spatial Manipulation (The Tachyon Blades can cut through the fabric of space and time), Time Travel, minor Probability Manipulation (Use of the Tachyon Blades will inevitably result in the arrival of the Vorefax within any given timeline with each subsequent use increasing its power even further), Acausality (Type 1 and 3: Talked to past versions of herself 7 times and survived the deaths of the previous 7 versions of herself), possibly Mind Manipulation, Madness Manipulation (Type 2), and Time Manipulation (Likely possesses the abilities of a Chrono Assassin)

Speed: Unknown (Outran the Hero of Lore for long periods of time)

Striking Strength: Athlete Class physically. Potentially Universal+ with Tachyon Blades (Can unleash the Vorefax which is capable of devouring an entire timeline)

Stamina: Very High (Fled from the Hero of Lore long periods of time without tiring)

Tachyon Blades: A pair of red and blue blades that have been described as capable of cutting the fabric of space and time, most typically used to open portals to the past, future, or simply to another location in the present. The presence of these blades were enough for Sekt, who manages a 4th dimensional pyramid, to regard Xeven as the most dangerous amongst the attendees at the Throne of Darkness including Sekt himself.

Chrono Assassin: A class most likely utilized by Xeven which is described as a class utilized by masters of time and space.

Retrieved from "https://vsbattles.fandom.com/wiki/Xeven?oldid=5386502"
Community content is available under CC-BY-SA unless otherwise noted.