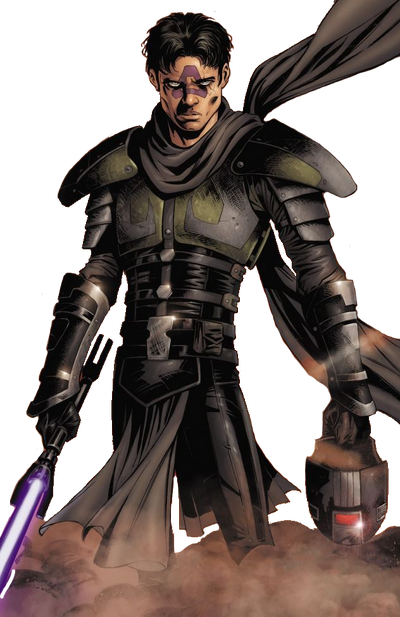 Xesh was a Human Force Hound for Predor Tul'kar of the Infinite Empire. Raised from birth to be a slave and trained in the Dark Side of the Force, he came into conflict with Je'daii Journeyors Shae Koda, Tasha Ryo, and Sek'nos Rath after crashing into the Tython System. Although he later assisted the Journeyers in their battle with an enormous saarl, he is captured and exiled to Bogan by several Je'daii Rangers and Masters. However, Xesh, as well as his powerful Forcesaber, would later return to Tython, where he and his blade would prove instrumental in helping the Je'daii repel the oncoming Rakatan invasion.

Age: Unknown, appears to be in his 20s

Powers and Abilities: Superhuman Physical Characteristics, Statistics Amplification (Force Amplification allows Xesh to channel the Force through his body to greatly augment his strength, speed, and durability), Precognition (Can sense the movements of others through the Force and predict their next move in the process), Clairvoyance, Telepathy, Psychometry, Telekinesis, Illusion Creation, Enhanced Senses, Extrasensory Perception (Can sense the presence of others through the Force), Mind/Memory Manipulation, Expert Forcesaber Wielder, Skilled Hand-to-Hand Combatant Energy Manipulation (Can reflect, redirect, and absorb energy attacks thrown at him), Electricity Manipulation (Can emit Force Lightning), Astral Projection (Can project a Force Shadow through which he can scout distances as far as other worlds)

Attack Potency: Country level (Through Tutaminis, Xesh proved capable of gorging on enough energy from the Force Storm his presence on Tython helped create quickly enough to be a match for the combined power of the Je'daii Order's strongest Masters being channeled through Quan-Jang, who were able to dispel the same Force Storm Xesh had created)

Speed: Relativistic with FTL reactions augmented by precognition (Much weaker characters have exhibited this level of speed)

Lifting Strength: Peak Human, can be augmented to Superhuman via Force Amplification

Striking Strength: Country Class with Force Amplification (As a Force-Sensitive individual, Xesh is able to channel his Force abilities into his physical blows and his presence alone was able to generate and maintain a constant storm over Tython)

Durability: Street level naturally; Country level with Force Amplification (Gorged on the power of the Force Storm his presence on Tython created with Tutaminis)

Intelligence: Trained from birth in the ways of the Dark Side as a "shadow warrior", Xesh is a deadly warrior able to match the might of the greatest Je'daii Masters, being exceptionally skilled in the use of a Forcesaber and in hand-to-hand combat, easily overwhelming three promising Jedi Journeyers in rapid succession, albeit while they were only armed with metal blades. He is also well-trained in the use of the Force, easily overwhelming Trill, a fellow Force Hound, with telekinesis alone, and prefers the use of Force Lightning to quickly kill his enemies. In addition, his status as a slave has pitted him in life-or-death gladiatorial matches from an early age, making him a skilled and pragmatic hand-to-hand combatant who will use anything in the environment to his advantage in order to kill his foes. However, he disliked the use of mental abilities, seeing them as unworthy of a warrior. Despite this, Xesh is still skilled enough in telepathy to push out former Je'daii Range Daegen Lok from his mind and later overcome the mental blocks placed upon him by Predor Skel'nas.

Weaknesses: Although he has access to the Mind Trick and other mental abilities, Xesh is reluctant to use them in the thick of battle due to his training as a shadow warrior. A sufficiently prolonged battle can deplete Xesh's reserves of Force energy and thus leave him vulnerable.

Retrieved from "https://vsbattles.fandom.com/wiki/Xesh?oldid=5705121"
Community content is available under CC-BY-SA unless otherwise noted.