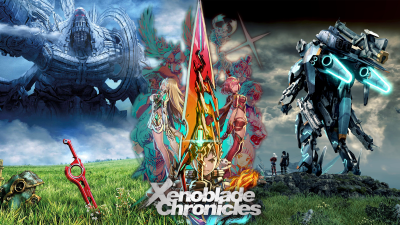 For detailed information about this series, visit the Xenoblade Wiki.

Xenoblade (Otherwise known as Xenoblade Chronicles) is the spiritual successor to Xenosaga and Xenogears developed by Monolith Software, and is a Nintendo exclusive.

In 2015, Xenoblade Chronicles X came out for the Wii U. The game is different from Xenoblade Chronicles and the only connection between them is the title and some creatures, it has the same gameplay and it features vehicular combat using mechas. Unlike Xenoblade Chronicles, the game was dubbed in the US (Although the voice actors of Shulk and Fiora can be selected as one of the Avatar's many voices).

Xenoblade: In the world, there were only two living beings, the Mechonis and Bionis, two gods fighting for all eternity. They continued to fight until Bionis cut off the Mechonis' left hand, and then both of their swords pierced each other at the same time. Over time, life flourished on top of these gods, but the battle waged between the Mechonis and the Bionis would be continued by their progeny, Bionis' Homs and Mechonis' Mechon. Millions of years later, the Homs and the Mechon were at war with each other, the humans barely manage to win the war thanks to Duban's use of the Monado, the Monado is a sword capable of harming the Mechon but they don't know how it works. One year later, the Mechon strike back, with their new models, the Face Mechon, which can take hits from the Monado; it is up to Shulk, the only Homs who can use the Monado, and the friends he makes along the way to stop them.

Xenoblade X: In 2054, two alien armies battle near Earth. The collateral damage causes immense death and destruction and forces humanity to evacuate the planet before the planet is completely destroyed. Two years later, one of the surviving Colony Ships - the American White Whale, holding the nascent city of New Los Angeles - is attacked by one of the alien factions, which had pursuit them. Thanks to the crew and one particular high-ranking officer riding a black-painted mech, the ship manages an emergency crash-landing on a hospitable planet: Mira; but the ship breaks down on orbit and throws down the pods. The player-created character, awakened from one such pod by one of the White Whale's staff, Elma; you must aid the struggles of those of New Los Angeles to survive, settle and thrive on Mira, a world filled with exotic locales and creatures.

Xenoblade 2: A human named Rex lives in the world of Alrest among the sea of clouds, where civilization lives on the backs of colossal beasts named Titans. He finds Pyra, a mysterious being known as a Blade who grants him tremendous power, and together they go searching for Pyra’s long lost home Elysium. Many different factions are after Pyra as well; this is because Pyra is the Aegis, a legendary, powerful Blade which is said to grant her Driver control of Elysium and all of Alrest.

Xenoblade is a very powerful verse. The technology is highly advanced, especially the ones that were created the race called High Entia, which has created machinery and weapons that are far beyond than most of the other races. It also contains several Gods who are Multiverse level+ reality warpers.

Egil
Add a photo to this gallery

Elma
Add a photo to this gallery

Pyra and Mythra
Add a photo to this gallery