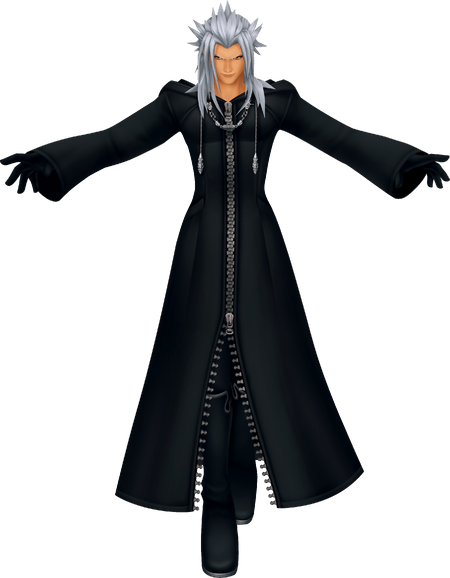 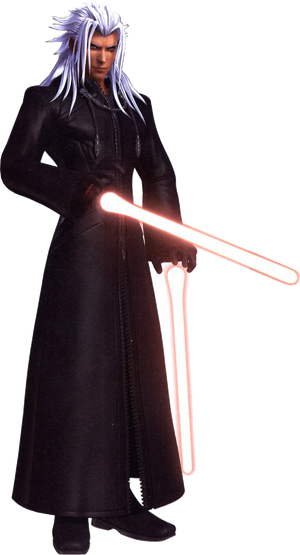 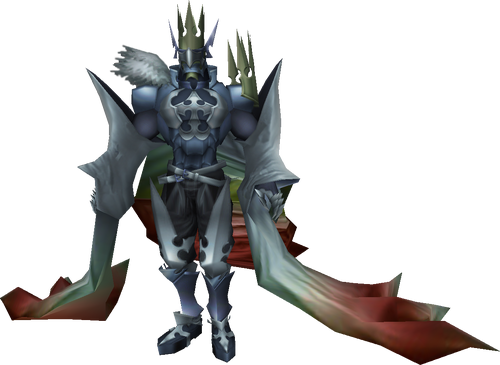 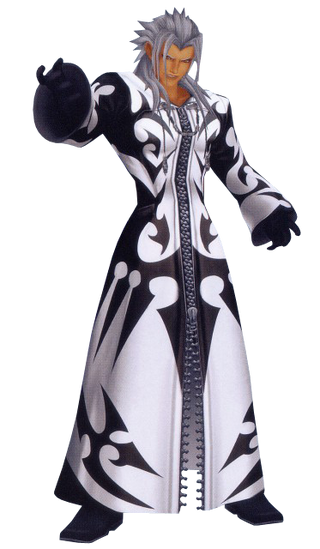 Xemnas wields the power of nothingness, which he channels this into his weapons, red blades of energy called Ethereal Blades, and commands the Sorcerer Nobodies. Xemnas is the founder of Organization XIII and, as the Superior, has dominion over all other Nobodies. He is also the Organization's most powerful member, to the point that Marluxia would not dare to face him alongside Larxene and Axel until Sora was also under their control.

Xemnas's name is derived from the alias his human form took when he assumed the identity of his exiled mentor, Ansem. Xemnas is a playable character in Kingdom Hearts 358/2 Days's Mission Mode.

Name: Xemnas, The Superior of the In-Between, Number I, Xehanort's Nobody

Age: Unknown, no more than 10 years of age, though physiologically a fully-grown man

Classification: Nobody of Master Xehanort and Terra, One of the Thirteen Darknesses, Leader of the original Organization XIII, (former) Ruler of The World That Never Was

Superhuman Physical Characteristics, Nobody Physiology, Self-Sustenance (Type 1. Can breathe in space), Flight, Teleportation, Magic, Void Manipulation (Has control over "nothingness", allowing him to manipulate "The Realm In-Between" and create his ethereal blades and also use them as projectiles, shoot expanding Energy Balls that explode to both block and deal damage), Immortality Negation (Types 5, Can destroy the skeletal forms of the piratesdespite being neither alive nor dead), Forcefield Creation, Attack Reflection (Can create damaging, reflective forcefields/barriers as well as use them to create makeshift cages around the target), Life Absorption, Attack Nullification, Power Nullification (Casts a spell that zaps away Sora's health and locks his commands), Telekinesis, Illusion Creation, Perception Manipulation (Can create illusions or alter the perception of others), Intangibility (By either dematerializing into fog or shrouding himself in an orb of darkness. Nobodies can turn intangible at will or when attacking), Expert Hand-to-Hand Combatant, Soul Manipulation (Threatened to destroy Lea's soul), Reality Warping (Transported Sora to a place he created, though this is likely an extension of his power over Nothingness), Durability Negation (via Nil), Summoning (Can summon his main weapon. Can summon hordes Nobodies of and Heartless. His Nobodies hold standard Nobody Physiology plus Magic and Intangibility. His Heartless hold standard Heartless Physiology, Danmaku, Portal Creation (Can create portals between worlds), Pocket Reality Manipulation (Created his own realm within his artificial Kingdom Hearts known as "The World of Nothing" that he has complete control, allowing him to create any number of objects such as skyscrapers to use as projectiles and creating a dragon for him to control and ride on), Light and Darkness Manipulation (Ex. Uses this to form white and black energy tendrils, summon white crests of light that shoot white energy beams, cast a dome of darkness around his enemies and shoot a barrage of ethereal blades at them, etc.), Transmutation (Threatened to turn Axel into a Dusk),

All previous abilities, plus Black Hole Creation (Created a black hole and forced Riku and Sora into it), Summoning (Can summon the weapons of his previous allies, such as Axel's Chakram's, Xaldin's Lances, Saix's Claymore, Xigbar's Arrow Guns, Luxord's cards, and Demyx's Sitar), Should have the powers of his fallen comrades: Elemental Manipulation (Axel's powers over Fire, Demyx's power over Water, etc.), Spatial Manipulation, Gravity Manipulation, Possession (Xigbar can warp entire sections of space, defy gravity,warp across the battlefield, and possess people), Transmutation, Time Manipulation, Sealing, Law Manipulation (Luxord is capable of turning people into a die or card, sealing them into cards,setting a time based game or rewind their defenses to 1, and set rules for his game people have to follow), Water Manipulation, Life Absorption (Demyx can manipulate water to create water based clones of himself, or to absorb life from enemies), Wind Manipulation, and Paralysis Inducement  (Xaldin can create gusts of wind to push back enemies, wind barriers, or to immobilize his foes)

All previous abilities to a far greater extent as well as BFR (Took Sora and Riku to the Realm Between), Enhanced Power Nullification, Attack Nullification, Life Absorption, (An enhanced version of his 'Invitation To Nothingness' ability, it can nullify the target's ability to attack, use abilities, and slow drains their life away. If given enough time, they'll be killed and their heart extracted), Afterimage Creation and Duplication (Able to create a single solid clone in battle to trick his enemies or assist him with damaging his targets)

Attack Potency: At least Large Star level (Able to fight an end-game Sora who had fought many powerful enemies including Maleficent, Sephiroth, and Ansem, far superior to Hades and the Titans who both should measure up to Zeus. Is the leader of and confirmed by Word of God to be the most powerful member of Organization Xlll, making him above Roxas at his full potential and the likes of Xaldin and Lexaeus who are both tied as the third strongest. Should at least be equal to Ansem who is stated to have destroyed Radiant Garden by his lonesome). Can ignore conventional durability with Nil | At least Large Star level (United with a broken Kingdom Hearts and matched the full power of Sora and Riku; a full-powered Kingdom Hearts is capable of restoring hundreds of destroyed worlds back to normal from darkness. Thus he is stronger than his base form and he would have killed Sora if not for Riku's interference). Can ignore conventional durability with Nil, Time, and Water. | Possibly Universe level (Comparable to if not slightly stronger than Sora and the other Guardians of Light). Can ignore conventional durability with Nil.

Speed: Massively FTL+ (Kept up with Sora, who is much faster than Monstro, which outpaced the Highwind, in the final stages of the first and second game. The Highwind has shown to be capable of traversing between worlds, which exist in different solar systems, in 130 seconds) | Massively FTL+ (Faster than his base form, spent the better part of his fight with Sora and Riku actively trying to blitz them by himself, and almost succeeding, his movements are a blur to Sora, likely copying the movements of Larxene who did the same)

Lifting Strength: At least Class M, likely higher (Has Terra's body and is able to effortlessly throw Sora and Riku in the air. Easily manhandled and restrained King Mickey with one hand), should reach Class Y with telekinesis.

Stamina: Very high (Created entire environments for Sora to fight in, summoned scores of Nobodies, and even fought Sora himself several times, and still showed no signs of fatigue by the time you get to him in the Realm Between; in Dream Drop Distance he manages to fight Sora to the point the latter is exhausted and later appears to be none the worse for wear)

Range: Extended melee range with his blades. Tens of meters with thorns and etheral blade projectiles. Planetary with telekinesis and magic. Low Multiversal with the Corridors of Darkness.

Standard Equipment: The Interdiction, his main weapon which are a pair of ethereal blades; crimson beams of energy which are extended directly from the palms of his hands that he can summon through willpower, he can change their length and size as well as suspend them in midair and fire them at will.

Intelligence: Xemnas, being an incarnation of Xehanort himself, is one of the craftiest and most devious characters in all of Kingdom Hearts, creating and manipulating Organization XIII for his own ends, fooling his fellow Nobodies into believing that they had no hearts when they could in fact cultivate a heart through relationships and personal attachments, a fact he only revealed after being revived to face Sora once more. He also possesses enough knowledge to see through Marluxia's plans of rebellion and sends Axel to dispatch of the traitors and has Sora defeat the ones that Axel could not. As the Superior of the In-Between, he is able to fight on par with Keyblade Master-level opponents like Sora and would have in fact defeated him if not for Riku's intervention. He assaults foes with devastating flurries of blade swings and kicks, deflects attacks and trapping foes with barriers, and wields the powers of every other member of Organization XIII with ease. He is still able to fight on par with Sora with the powers the latter gained during the events of Dream Drop Distance, tiring the hero into exhaustion so that Xehanort could kidnap him.

Weaknesses: Xemnas cannot attack while he is intangible and must be hardpressed in order to use his Limit Break.

Note: Xemnas is able to wield the weapons of his fallen comrades while in his Armored form. We see this during the battle with Armored Xemnas when he uses Xaldin's Lances, Axel's Chakrams, Saix's Claymore, Demyx's Sitar, Luxord's Cards and Xigbar's Arrowguns. Though he has only been shown to wield the weapons of several of his comrades and was only seen using a couple of their powers (i.e Demyx and Axel), it is very possible and/or likely that Xemnas could use the other powers of Saix's, Luxord's, Xigbar's, and Xaldin's.

Tetsuya Nomura had stated in an interview that Xemnas is the most powerful being in Kingdom Hearts. Though not only was this from a while back, Nomura never specified which Xemnas (Base or Twilight) he was referring to at the time. Given the game's feats between Base Xemnas and Twilight Xemnas, it is very likely that Tetsuya was referring to the latter.

Xemnas's Sword that he uses while in his armored form. 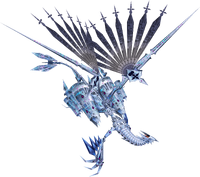 Thunder Guard and Slice Combo right after the other

Invitation to Nothingness v2
Add a photo to this gallery