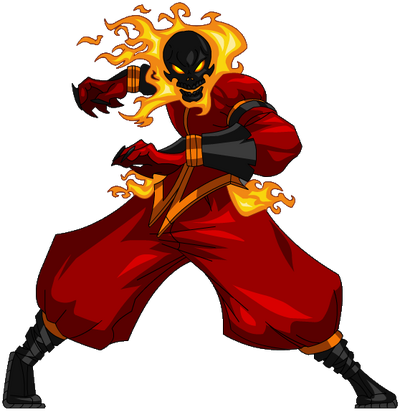 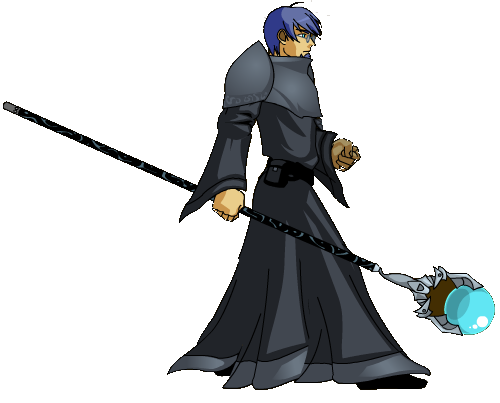 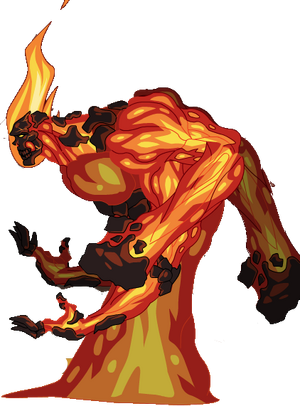 Xan, previously known as Alexander, is an insane pyromancer was formerly a classmate and rival of Warlic within their magical studies, being equally capable as mages. Their rivalry stems from their equal desire to earn the heart of Jaania which they both decided to settle through a duel. While in the middle of fighting, Jaania decided to intervene in fear of both of them causing major injuries upon themselves and stood within Alexander's line of fire, thus ending up caught within his self-regenerating ice spell. Warlic then cast a curse on Alexander's face so that it would be continuously burnt by a inextinguishable fire while also being unable to die, resulting in his insanity by the constant pain.

Powers and Abilities: Superhuman Physical Characteristics, Magic, Ice Manipulation | All previous, Explosion Manipulation, Fire Manipulation, Magma Manipulation (Can convert the water of entire rivers into lava), Summoning, Non-Physical Interaction, Resurrection, Regeneration (Mid), Immortality (Types 1 and 2), Illusion Creation (Cast an illusion on a numerous amount of fire-aligned creatures to disguise them as aligned with light). Resistance to Fire Manipulation, Magma Manipulation (Can casually tread barefoot on lava swells), Pain Manipulation (Has gone through enough pain from his burning head to the degree where he has grown used to it), and minor Madness Manipulation (Has grown accustomed to his degree of insanity to the point where he is able to act normally with enough consideration while also simultaneously still mentally unstable) | All previous, Inorganic Physiology, Elemental Intangibility, Large Size (Type 3)

Attack Potency: Unknown (Equal to a younger Warlic), at least Island level with his most powerful spell (Accidentally sealed Jaania in an ice crystal which neither Warlic nor Xan with the Pyronomicon could destroy) | Town level (Responsible for the complete destruction of the town of Falconreach), up to Island level with the Pyronomicon (Defeated the Hero on their first encounter and was unable to be defeated by restricted Warlic. Assisted in fighting against Wargoth) | At most Planet level (Equal to the World Destroyer and comparable to Titan Wargoth)

Durability: Unknown | Town level, up to Island level with the Pyronomicon | At most Planet level

Stamina: Extremely high. Can endure the flame that is constantly killing and keeping him alive.

Intelligence: Possesses knowledge comparable to that of Warlic but is typically unable to think straight due to his insanity and from his burning face.

Retrieved from "https://vsbattles.fandom.com/wiki/Xan?oldid=5386499"
Community content is available under CC-BY-SA unless otherwise noted.