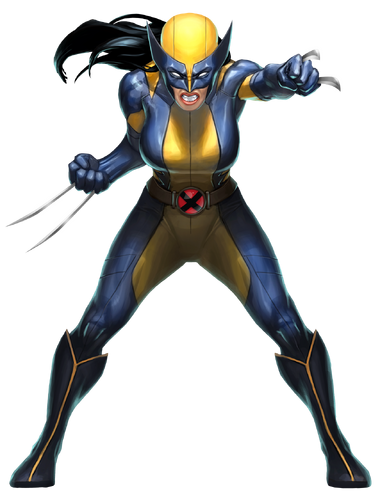 X-23 is a fictional comic book superheroine appearing in books published by Marvel Comics, most commonly in association with the X-Men. She was originally created by writer Craig Kyle for the X-Men: Evolution animated series before debuting in the NYX comic series in 2004. Since then, she has appeared in two six-issue miniseries written by Craig Kyle and Christopher Yost, regular runs in New X-Men, X-Force, Avengers Academy, and her own self-titled comic series written by Marjorie Liu.

X-23 is a female clone of Wolverine. Like Wolverine, X-23 has a regenerative healing factor, superhuman strength, senses, speed, agility, and reflexes. She also has retractable adamantium-coated bone claws in her hands and feet.

Cloned from a damaged copy of Wolverine's genome and Dr Sarah Kinney's genetic template, X-23 was created to be the perfect killing machine. For years, she proved herself a capable assassin working for an organization called the Facility. A series of tragedies eventually lead her to Wolverine and the X-Men. She attends school at the X-Mansion, and eventually became a member of X-Force.

Tier: At least 9-A, 4-B with durability negation via Adamantium claws

Superhuman Physical Characteristics, Enhanced Senses (Can smell emotions and lies, and could smell that Jubilee was a vampire. Can hear her clone’s heartbeat and piece events together through only sound. Can see heat signatures with her suit, and detect the drug used on someone through sight. Can detect an invisible person through her senses]), Regeneration (Low-High; Stated to have superior regeneration to the original Wolverine, which was confirmed by Logan himself), Immortality (Type 3), Longevity, Adamantium skeleton and claws, Martial Arts (Black Widow stated she’s one of the best fighters), Weapon Mastery (Could headshot a helicopter pilot at the age of thirteen. Performed a successful shield toss, did tricks with Gambit’s staff and landed three headshots), Acrobatics (Did a flip off of Captain America), can enter into a berserker rage in which she attacks randomly on instinct and is even more resistant to telepathy

Resistance to Telepathy (Emma Frost struggled to break her mental defenses, and Rachel Summers struggled to disable her mind), Enhanced Senses (Logan couldn't find her scent), Poison Manipulation (Could rip apart a group of soldiers while unfazed by various chemicals), Sound Manipulation (She was able to withstand the scream of a Mutant child that KOed two normal humans and blew the windows out of a car. She then withstood a larger scream at close range, and only her hand was damaged), Pain Manipulation (Cut off her own hand), Fire Manipulation (Walked through fire with no damage whatsoever, came out of a fire with minimal injuries and was stated to do so regularly), Disease Manipulation (Her system was able to fight off the Legacy virus. Her healing factor allowed her to resist a virus’ effects), Cold Manipulation (Showed no discomfort from being completely covered in snow. Could very briefly survive the vacuum of space)

Speed: Massively Hypersonic+ combat speed and reactions (Cloned from Wolverine, but is somewhat swifter than he is. Fast enough to evade bullets fired from a high-powered rifle. Removed Captain America's shield then flipped over his back, while dodging darts from a team of S.H.I.E.L.D. agents. Intercepted a bullet. Dodged a blast from Mister Sinister that Gambit couldn’t)

Lifting Strength: At least Class 1 (Ripped a metal door off its hinges. Carried a man in a suitcase with one hand and threw him. Snapped off a piece of railing from the Eiffel Tower and used it as a weapon, then broke her opponent's arm by twisting it. Three grown men struggled to restrain her, even after she was shot in the stomach)

Durability: At least Small Building level (She was still mostly in one piece after being launched by a huge explosion and withstanding enough electricity to burn another person to ash, and survived the detonation of a high number of grenades from a very close distance). Higher with regeneration

Stamina: Virtually inexhaustible. Her muscles constantly repair themselves. She managed to survive a blast from Nimrod despite not having her healing factor. Could continue fighting despite being reduced down to a skeleton. Didn’t even flinch from a shark biting her.

Intelligence: She is very precise and knowledgeable in anatomy and killing tactics. She also speaks fluent French and has extensive knowledge of information gathering. Has some knowledge of forensics. She is also extremely skilled, as she was able to beat Wolverine’s time on the Weapon X training at the age of eleven and Domino indirectly stated she was more skilled than Logan. Beat her own time on every mission for three years straight. Can skin a man like an onion, and think of twenty-seven ways to kill someone by looking at them.

Weaknesses:  She has also been subjected to conditioning in which a specific "trigger scent" has been used to send her into a berserker rage, killing anything in sight, and injuries such as being hit with blasts of energy from Nimrod that caused her to age can't be healed, if she had been hit with it again she most likely would have died