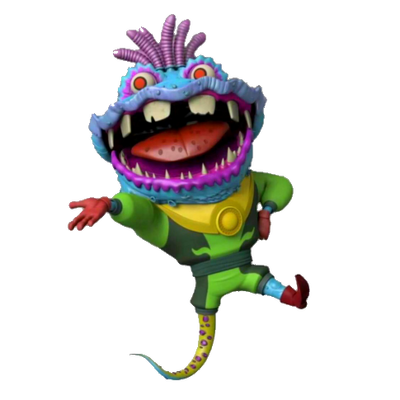 Wyrm is one of the three reality bending creators of chaos, who were put in prisons millennia ago, and scattered throughout the cosmos. He's stated to be the most powerful Wyrm, and wishes to bring the entire universe into chaos.

Name: Wyrm (Also the name of his species)

Speed: Massively FTL+ (Flew to multiple planets while blowing them up in a short moment)

Intelligence: Above Average. Despite his playful nature, he has a definitive knowledge of different dimensions and is capable of pulling clever tricks on his opponents.

Weaknesses: He can only be free from his imprisonment by granting 3 wishes. Certain wishes can be used against him.

Note: While Wyrm is stated to have come from the 5th dimension, this does not automatically make him Low 1-C as there isn’t evidence to determine that it is an actual spatiotemporal dimension and he hasn’t remotely demonstrated any feats on that scale.