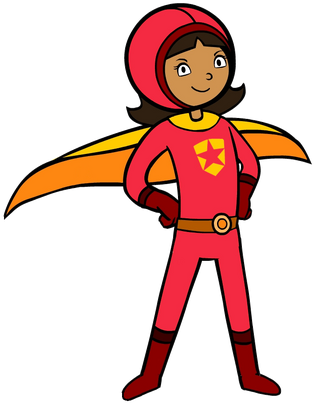 Wordgirl is an 11 year old superhero that arrived here from another planet called Lexicon. Lexicon is a far away planet in the galaxy from which WordGirl arrives in Earth and is adopted by the Botsfords. Her secret identity is Becky Botsford. She has an outstanding vocabulary and knows the definition of nearly every word. She has a sidekick called Captain Huggy Face.

Attack Potency: Town level (Was able to catch a meteor)

Speed: FTL+ (Could fly to the sun within 5 seconds)

Lifting Strength: Class G (Stopped a meteor from producing this much force)

Range: Standard melee range to tens of meters with her cold breath

Intelligence: Genius in English and in combat; Average everywhere else (She knows almost every word in the English language and can think of very good battle strategies; she has exceptional vocabulary but is average in other fields)

Weaknesses: Lexonite and can be too suspicious sometimes; her ego can also get in the way