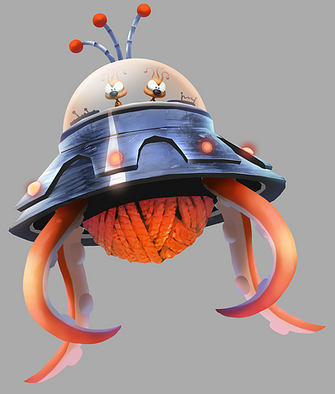 Led by Queen Poly and Ester and originating from Planet Rayon, the Woolies are an evil alien race bent on acquiring all the yarn in the galaxy. They're the archrivals of Bubsy for trying to steal his massive yarn collection. They've been feuding ever since.

Powers and Abilities: Superhuman Physical Characteristics, Regeneration (High-Low; Able to regenerate their noses after launching them), Body Control (can launch their noses as an attack), Likely Self-Sustenance (Type 1; Most Bubsy characters can breath in space without a helmet), Energy Projection via W.F.O.'s laser cannons, Flight via W.F.O.s and jetpacks, Vehicular Mastery and Spaceflight (with Woolie Flying Objects), Cheese Manipulation (can form and throw lethal cheese wheels), have mastered the use of eggs as projectiles via hand and catapult

Speed: Transonic (scaling from Bubsy) with Speed of Light attack speed (via W.F.O. lasers), possible Massively FTL travel speed in W.F.O.'s (Stated the distance between Rayon and Earth was two lightyears, though the time it took to the Woolies to reach Earth isn't stated)

Durability: Small Building level (Scaling off Bubsy), higher with W.F.O.'s (It takes Bubsy more hits to defeat a W.F.O. than it does to defeat a plain Woolie)

Intelligence: Unknown, likely Genius (can make master invasion plans and have, at the very least, a basic understanding of combat)

Weaknesses: Lack of arms, which might detriment them in basic melee combat 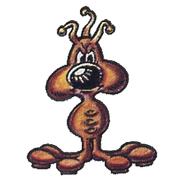