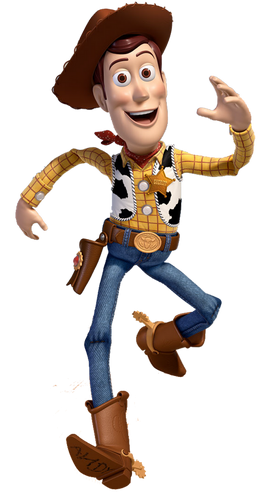 Woody, sometimes titled Sheriff Woody, is one of the main protagonists of the Toy Story franchise. Woody is a 50s-era smart toy that uses a pull string to repeat a select few phrases; however, when Andy (or any other human) isn't watching, Woody and the other toys would "wake up;" that is, switch from being inanimate objects to living toys. Before Andy got Buzz Lightyear for his birthday, Woody was Andy's favorite toy. After an initial falling-out with Buzz Lightyear over his own jealousy, Woody and Buzz would become respectable friends with one another.

Age: At least in his 50s (Stated himself to have been made in the 1950s, and assuming Toy Story 4 takes place in the year it was created, the youngest he could be is 59)

Powers and Abilities: Small Size (Type 1), Immortality (Type 2; Should be comparable to Sid's toys), Longevity, Inorganic Physiology (Type 1), Stealth Mastery (Constantly stealths around humans. Escaped Sunnyside twice), Preparation (Made a plan to escape Sid's house using the other toys' unique abilities and did the same when escaping Sunnyside a second time), Fire Manipulation (With a match), Flight (With a glider/kite), Self-Sustenance (Type 2), Limited Body Control (Can rotate his head 360 degrees) and Resistance to Pain (Had his arm ripped off and didn't feel any pain)

Attack Potency: Below Average level (Can harm other toys. Said toys can survive long falls, being stepped on, thrown around, or kicked by humans, and being bitten by a medium-sized dog), possibly higher (Comparable to Ducky and Bunny, who considered themselves capable of overpowering an old lady)

Lifting Strength: Below Average Human (Comparable to Buzz Lightyear, who can lift Slinky Dog, Mr. Potato Head, Ham and Rex all at once with high difficulty. Did this)

Stamina: High (can travel long distances on foot without much exhaustion)

Intelligence: Above Average (Skilled planner and leader, knows how to hide around humans. Made a plan to escape Sid's house using the other toys' unique abilities and did the same when escaping Sunnyside a second time)

Weaknesses: Due to being made out of cloth, he can be easily burned down. Will go to extreme lenghts to protect his child and might even put himself in danger in order to do so.