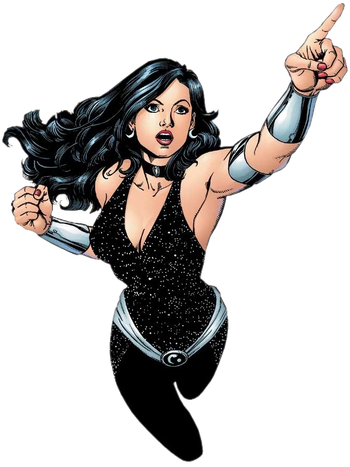 Donna Troy is an Amazon super-hero who began her career as the second Wonder Girl, but has also used several other names including Troia, Darkstar, and Wonder Woman. Terry Long was her first husband with whom she had a child named Robert, and she also had a relationship with Kyle Rayner. She is a founding member of the Teen Titans, and has also been involved with the Challengers from Beyond, Darkstars and Justice League of America. Donna Troy was created by Bob Haney and Bruno Premiani, first appearing in Brave and the Bold #60 (1965).

Powers and Abilities: Superhuman Physical Characteristics, Flight, Enhanced Senses, Regeneration (Mid-Low), Expert Hand-to-Hand Combatant, Weapon Mastery, Forcefield Creation, Memory Manipulation (Capable of projecting three-dimensional images of a person's memories), Immortality (Type 1), Self-Sustenance (Type 1; Can survive in space), Can imitate the voice of anyone she has heard, Can make her opponent do whatever she demands with her Lasso of Persuasion, Resistance to: Magic, Telepathy, Illusion Creation, Poison Manipulation, Disease Manipulation and Reality Warping

Intelligence: Like all Amazons, Donna is exceptionally well trained in the use of various weapons and in various martial arts. She is also a very capable leader and strategist.