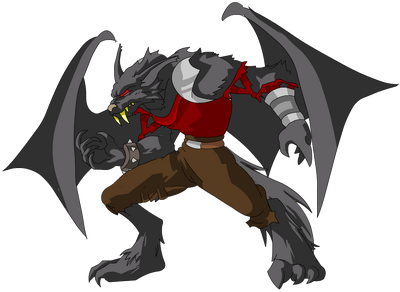 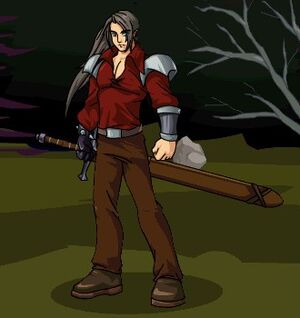 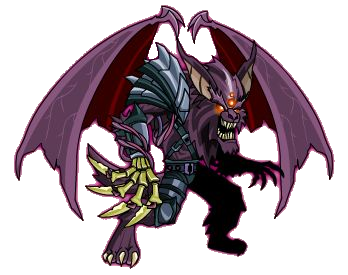 Wolfwing, was the leader of the Were-Pyres and the father of Nightbane and the grand-father of Cenara and Vampire Slayer E. Originally he sided with Unity against The'Galin and is noted to be relatively peaceful compared to both Safiria and The Were-King, despite possessing both characteristics of werewolves and vampires. Previously he was a normal man named Erimus until he was infected with the lycanthropic disease after being attacked by a Lycan. While in the process of becoming a werewolf, he was then bitten by Safiria and became the first individual to become a Were-Pyre. After his Chaorruption, he became the 5th Lord of Chaos and the main antagonist of the Darkovia Story-line of the 13 Lords of Chaos Saga.

Classification: Were-Pyre (Cross between a werewolf and vampire) | 5th Lord of Chaos

Powers and Abilities: Superhuman Physical Characteristics, vampire and werewolf physiology, Transformation, Flight, Enhanced Senses, Disease Manipulation (Werewolves can inflict the "lycanthropic disease" via bite), can transform other individuals into werepyres | All previous, Immortality (Type 2 and possibly 3 when exposed to moonlight), Corruption, possibly Regeneration (Mid-High. Could regenerate at least one of his eyes after being completely reduced to dust and was heavily implied to be able to fully regenerate his being in the same fashion) when exposed to moonlight. Resistance to some degree of Power Nullification (Chaos powers are unable to be removed or cancelled except by the Tears of the Mother)

Attack Potency: Unknown (Equal to Nightbane) | Likely Large Building level (Deemed a greater threat to Lore than the Werewolf King and Safiria combined, with the latter being able to easily destroy large buildings and castle towers)

Stamina: High | High. Will increase even further when exposed to moonlight

Intelligence: Average | Average. Is usually unable to think straight due to the influence of Chaos but otherwise was able to incite conflict between the vampire and lycan kingdoms unbeknownst to them, to assist in his own plan to raise a Chaos Beast.

Weaknesses: None Notable | Lacks a sense of focus. Due to his partial vampire physiology, he may turn to ash when exposed to sunlight. The Tears of the Mother are able to remove one's Chaos powers.

Retrieved from "https://vsbattles.fandom.com/wiki/Wolfwing?oldid=5386498"
Community content is available under CC-BY-SA unless otherwise noted.