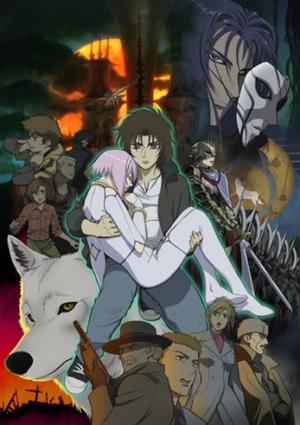 Wolf's Rain (Japanese: ウルフズレイン Hepburn: Urufuzu Rein?) is an anime series created by writer and story editor Keiko Nobumoto and produced by Bones Studio. It was directed by Tensai Okamura and featured character designs by Toshihiro Kawamoto with a soundtrack produced and arranged by Yoko Kanno. It focuses on the journey of four lone wolves who cross paths while following the scent of the Lunar Flower and seek for Paradise.

According to an old legend, when the end of the world comes, a place known as Paradise will appear. However, only wolves will know how to find it. Although wolves are believed to have been hunted to extinction nearly two hundred years ago, they still exist, surviving by casting illusions over themselves to make them appear human. Freeze City is a northern human city in a world where the majority of people live in poverty and hardship.

Kiba, an injured lone white wolf, goes to Freeze City following the scent of the Lunar Flower, which is the key to opening Paradise. There he encounters Tsume, Hige and Toboe, three other wolves who were drawn to Freeze City by the scent of the Lunar Flower and are now living in the city. The wolves encounter Quent Yaiden, a former Sheriff of Kyrios who is obsessed with hunting down wolves, and his dog Blue. Cheza, the Flower Maiden who is destined to lead the wolves to Paradise, is being studied at a laboratory under the care of Cher Degré. She is awakened by the smell of wolf's blood. As Kiba and Hige approach the lab to find her, she is stolen away by Lord Darcia the Third, whose people created Cheza.

With the Flower Maiden gone, the wolves have no reason to stay in the city. Despite some initial misgivings and suspicions, they decide to stay together and follow Kiba in his search for the Flower Maiden and Paradise. As they pursue Cheza, the wolves travel through various cities and the remnants of former habitations. Cher joins the city's army to try to recover Cheza, while Cher's ex-husband Hubb Lebowski searches desperately for Cher, and Quent continues his relentless pursuit of the wolves. When Blue eventually encounters Cheza, it awakens her wolf blood from dormancy and causes her to leave Quent and take on her own human form. She joins the wolves and travels with them for a while, developing an intense and close romantic relationship with Hige, and meanwhile Hubb finds himself traveling with Quent, who is now searching for Blue as well as the wolves. Hubb eventually finds Cher and from there they continue their pursuit of the wolves to find Cheza.

Together the wolves reach Darcia's keep after Kiba goes off on his own. Hubb, Cher and Quent arrive in the keep, and Tsume, Toboe, and Hige find Kiba, Cheza and Darcia during a sword fight between Darcia and Kiba. The reunion is short-lived however because Jaguara's troops attack, destroying the keep in the process. The Noble's troops capture Cheza, Hubb, Cher and Blue during the raid, and the wolves get separated from Kiba. After finding Kiba, the wolves continue their journey to rescue Cheza from Jaguara, while Cher rescues Blue and manages to find Cheza with help from Hubb, but Jaguara's troops instantly recapture Cheza, taking Hubb with them and forcing Cher and Blue to find Cheza on their own.

The wolves and the humans eventually come together in Jaguara's city, where the captured Cheza is being held. In attempting to rescue the abducted Cheza, Kiba, Tsume and Toboe are captured. Tsume and Toboe are thrown into a dungeon with Hubb while Jaguara attempts to use Kiba's blood to force Paradise to open. Meanwhile, Hige and Blue are reunited outside the Keep, where Hige remembers that he had once worked for Jaguara and decides to go rescue his friends, but not before telling Blue to stay outside and promising her that he will return to her no matter what. While waiting for Hige, Blue is reunited with her master Quent and meanwhile Darcia, having survived the attack on his keep, interrupts Jaguara's ceremony as Kiba and the other wolves break free and rush to free the Flower Maiden. Hige is wounded during the fight against Jaguara and Kiba arrives after Darcia is poisoned by the Noble. Darcia battles Jaguara along with Kiba and finally slays her as the keep begins to collapse. The wolves and the humans barely escape with their lives, and Quent is gravely wounded saving Blue from an oncoming vehicle after escaping from Jaguara's city.

The wolves, now accompanied by Cheza, Cher, Hubb and Quent, continue trying to make their way to Paradise, pursued by the now insane Darcia. Cher, Toboe, Quent, Hubb, Blue, Hige and Tsume are all killed before they can see Paradise, leaving only Kiba, Cheza and Darcia alive at the place where it can be opened. Darcia is killed when he attempts to enter Paradise, and Cheza's body disintegrates into seeds. Fatally wounded, Kiba concludes that his quest has failed, but as he lays dying, rain begins to fall and Cheza's seeds grow into thousands of lunar flowers. Kiba is then plunged into the waters depths as he dies, the blood red moon turning back to its normal color. Cheza's death causes Paradise, as well as the world, to be reborn. However, Darcia's corruption can be seen taking root in this new Paradise.

Retrieved from "https://vsbattles.fandom.com/wiki/Wolfs_Rain?oldid=1787723"
Community content is available under CC-BY-SA unless otherwise noted.