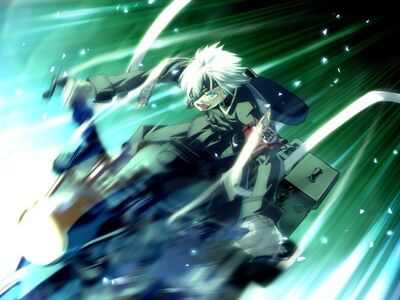 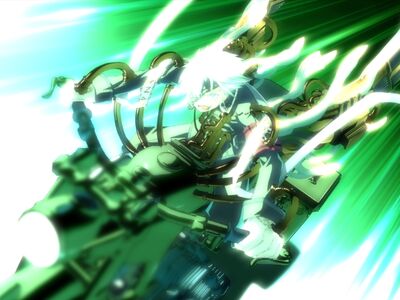 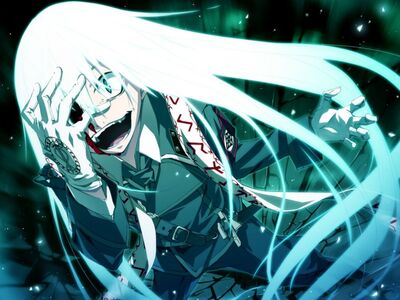 Powers and Abilities: Superhuman Physical Characteristics, Immortality (Types 1, 3, and 8. As an Einherjar he is immortal as long as Reinhard Heydrich exists.), Self-Sustenance (Types 1, 2 and 3), Regeneration (Low-Godly, High-Godly within Gladsheimr), Enhanced Senses, Extrasensory Perception (Ewigkeit users have a "third eye" which allows them to see through a person identity by viewing the color of the soul, and perceive invisible attacks such as Ren's Assiah), Soul Manipulation (Can devour souls and can attack directly the soul of his targets), Law Manipulation (Briahs are described as the implantation of a new law into reality), Reality Warping (Briah allows Ewigkeit users to impose their own desire on reality), Magic (Ewigkeit is a form of Sorcery that fuses the Soul of its user with a Holy Relic. in addition their attacks will become magical in nature), Reactive Power Level (His Briah, Niflheimr Fenriswolf, will make it so that Schrieber will always be faster than his opponent), Shockwave Generation (Even while limiting himself to Assiah, Schrieber's movements release massive shockwaves that devastate his surroundings as he runs and jumps around), Regeneration Negation (Up to Low-Godly; Holy Relic's carry a poison that hinder or negate regeneration of the soul), Non-Physical Interaction (Holy Relics are capable of hitting disembodied souls), Energy Absorption, Berserk Mode, Durability Negation (Attacks of a Holy Relic user are impossible to nullify since they attack on both a physical and spiritual level), Immunity to natural poisons and diseases, Resistance to Magic, Mind Manipulation (Was unaffected while in the presence of Methuselah) and Soul Manipulation (All Holy Relic users are capable of enduring attacks that hit the soul) | All previous abilities in addition to Acausality, Causality Manipulation, Conceptual Manipulation, Regeneration (High-Godly; can regenerate from conceptual destruction), Probability Manipulation, Abstract, Non-Corporeal

Attack Potency: Mountain level (Superior than both Eleonore and Machina due to him holding the highest amount of souls among all LDO members bar Reinhard himself. Casually leveled Berlin during the prologue which yielded this much power. His raw destructive power far exceeds that of Wilhelm and Cain), can bypass durability by attacking his opponent's soul | At least Large Planet level, likely far higher (Superior to boosted Wilhelm Ehrenburg who could smash Methuselah's Jaws of Darkness) | High Outerverse level (Inhabits the same level of existence as a Hadou God)

Stamina: Limitless (Has an endless amount of souls due to his connection with Gladsheimr, allowing him to fight forever) | Limitless | Limitless

Standard Equipment: His Holy Relic Lyngvi Vánagandr, and a Luger P08 and a Mauser C96 pair (Both of which have infinite ammo, abnormal fire rates, can literally ricochet off of empty space, hitting his target even if they initially miss, and can damage the soul. They also contain properties of Wolfgang's Briah, allowing the bullets to always become faster than Wolfgang's enemies).

Intelligence: While insane, Schreiber is a master of murder, torture, and savagery, spending decades refining his ability to hunt down, stalk, and slaughter his foes. His raw speed and experience has led him to subconsciously analyze all foes he lays eyes upon, reading their facial expressions, the frequency of their heart beats, sweating and adrenaline level before moving for the kill. However, once his True Briah activates, he abandons all of these skills, his consciousness retreating to fight with all the ferocity of a wild animal, an unrelenting, merciless predator that tears his foes apart with random punches, kicks, and bites.

Weaknesses: Wolfgang is completely insane and possesses a split-personality disorder. His primary personality is extremely sadistic and he frequently prolongs battles far longer than he actually has to. Any technique that can fully halt Wolfgang (such as Time stop) can nullify Nilfheimr Fenriswolf. Schrieber can be caught if he is faced with an attack he was completely unable to expect or perceive, such as a surprise attack from an ally or an opponent climbing out of his target's chest even though they were supposed to be dead, since the shock will force him to pause. When Nilfheimr Fenriswolf is active, Schreiber is in a state of uncontrollable rage, and can only be calmed down by Reinhard.

Mami Tomoe (Puella Magi Verse) Mami Tomoe's Profile (Base Schreiber and Magia Record Mami were used, speed was equalized, both were in character and starting distance was 1 kilometers)