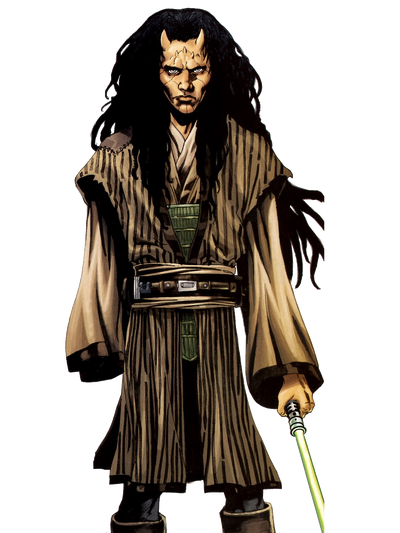 Wolf Sazen was a Zabrak Jedi Master who was active during the Sith–Imperial War and the subsequent Second Imperial Civil War against Darth Krayt's Galactic Empire. He was Kol Skywalker's Padawan and the Jedi Master of Kol's son, Cade Skywalker. Before Cade's training could be completed, Darth Krayt's army of Sith, led by Darth Nihl, attacked the Jedi Academy on Ossus and Kol was killed fighting them off, Sazen being mortally wounded by Nihl in the process, though Cade used the Force to bring him back from the brink of death only to go after Nihl, and was thus presumed dead.

Sazen spent several years in hiding, until he and Shado Vao encountered Skywalker on Vendaxa. Sazen believed that Skywalker would be the one to unite the Jedi against Krayt, though Cade turned down his offer and parted ways with him. They eventually met again at the ruins of the Jedi Praxeum on Ossus, and Skywalker agreed to continue his training, though this only lasted a few weeks before Cade went to face Krayt on Coruscant.

Sazen later went after his former apprentice as the forces opposing the Sith were joining together in an alliance. Sazen successfully drove Cade back to the light side on Wayland by telling him to use it instead of the dark side. After Cade swore to wage war against the Sith, Sazen joined him in his hunt for Sith scientist Vul Isen. Cade and Sazen tracked Vul to Utapau, where Sazen killed Darth Azard. Shortly afterwards, Krayt's forces launched an all-out assault on the Hidden Temple. Sazen participated in the battle, but was forced to retreat with the arrival of specially-bred Sith Troopers. Fleeing to Bastion, the allied Jedi-Imperial-Alliance fleet decided to attack a vulnerable Coruscant. Sazen became a member of a small strike team to infiltrate the capital's planetary defense grid, ultimately succeeding in shutting it down. Heading to the Temple of the Sith, Sazen engaged in a duel with Darth Stryfe, a fight which ended in their mutual deaths.

Attack Potency: Planet level (Fought but was ultimately inferior to Darth Nihl. Took on and killed half a dozen Sith alongside Shadao Vao. Traded blows with Cade Skywalker. Killed Darth Azard and Darth Stryfe. Defeated multiple Sith alongside Cade during the Bombing of Falleen.)

Intelligence: Gifted (Wolf is a highly skilled lightsaber duelist, able to take on and kill numerous Sith simultaneously on several occasions and match notable Sith Lords such as Darth Azard and Darth Strife in single combat while constantly remaining calm and levelheaded, as well as hold his own in a fistfight with Cade Skywalker even with just one arm. Due to his deep connection to the Living Force Sazen is skilled in Force abilities as well, particularly things such as Force Sense, with which he was able to track the presence of Darth Talon at a distance even while she was using Force Cloak, and Force Visions, which he received on numerous occasions. He is also highly conventionally intelligent, even going so far as to be fluent in multiple languages such as Basic, Huttese, Ryl and Zabraki)

Retrieved from "https://vsbattles.fandom.com/wiki/Wolf_Sazen?oldid=4451274"
Community content is available under CC-BY-SA unless otherwise noted.