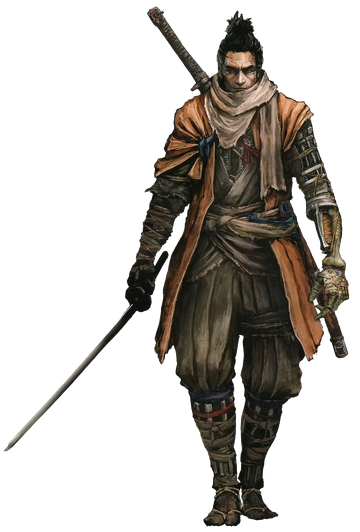 Warning: this page contains spoilers for Sekiro: Shadows Die Twice. If you do not wish to have the story spoiled, please leave the page.

Wolf, nicknamed Sekiro is the eponymous main character of Sekiro: Shadows Die Twice. Taken from the battlefield by the Great Shinobi Owl and trained in his ways, Wolf becomes bodyguard to Kuro, the Divine Heir, whose lineage is bequeathed with the Dragon's Heritage, a blessing (or curse, as Kuro sees it) that grants immortality to its holder and those of their choosing. After Wolf is killed rescuing The Divine Heir in Hirata Estate, Kuro chooses to share his power with him, reviving him and giving him the ability to return from death. After Kuro is captured by Genichiro Ashina, who sought to use the power of the Dragon's Heritage to become undying and save his besieged homeland, Wolf attempts to help Kuro escape, but is intercepted by Genichiro and loses his left arm in the ensuing fight. Losing consciousness from blood loss, he awakens at a run-down temple occupied by a sculptor, who supplies him with an advanced prosthetic meant for shinobi such as himself. Venturing to Ashina castle once more, Wolf faces Genichiro once again after much tribulation and emerges the victor, with Genichiro fleeing the castle. After reuniting with Kuro, the two set out on a mission to be rid of the Dragon's Heritage, as Kuro deems it not worth the strife and suffering it causes.

Superhuman Physical Characteristics, Stealth Mastery, Martial Arts, Weapon Mastery (Katana/shurikens/firecrackers/axe/knives/umbrella/whistle), Enhanced Senses (Can see unusually well in the dark and hear conversations from a distance. Could easily notice Owl trying to attack him from behind and deflect his attack), Psychometry (Can discern past conversations that happened in a location), Acrobatics, Genius Intelligence (In combat), Partial Cyborgization (After he lost his arm, Sekiro possesses a rudimentary prosthetic arm that allows him to use his Prosthetic Skills), Immense Pain Tolerance (Can endure serious injuries and punishment, such as deep lacerations, being burned, and electrocuted, and can still keep fighting), Limited Durability Negation (Via Deathblows and Mortal Blade: Deathblows can deal severe/lethal damage that otherwise could not be achieved with his normal attacks, and Mortal Blade is able to chip through one's guard), Resurrection, Immortality (Types 4 and 8: Bound by the Dragon's Heritage and will resurrect if he is killed. If he were to be killed several times, the Dragon's Heritage would steal a person's life-force in-order for him to resurrect without using too much of the Dragon's Blood. Though this would result in them being afflicted with Dragonrot, a lethal disease which causes them to wheeze and cough up blood), Fire Manipulation (with Flame Vent and other Shinobi tools derived from it), Poison Manipulation (with Sabimaru), Air Manipulation (with Divine Abduction; Gathers and releases a gust of wind, forcing enemies to turn around if they are caught by it. Those who are caught by it are said to be "spirited away" and never return), Sound Manipulation (with Finger Whistle), Explosion Manipulation (with Firecrackers), Healing (Low-Mid with Healing Gourd and Pellets), Statistics Amplification (with Buddhist candies and Spiritfalls, which can amplify both durability and attack power. One Mind increases Wolf's latent speed, allowing him to perform multiple slashes while seemingly not unsheathing his weapon. Can also increase his attack power with Mortal Draw, which also extends range of his slice), Limited Invisibility (with Gaachin's Sugar/Spiritfall), Teleportation (with Homeward Idol and Crow Feather), Blessed (via Mibu balloons, Unseen Aid, and Divine Confetti: Divine Confetti allows one to harm apparition-type beings), Limited Electricity Manipulation and Attack Reflection (Can redirect lightning of his opponent back at him), Can nullify illusions with Snap seeds or Lazulite Axe, Summoning (Phantom Kunai summons phantom butterflies when thrown), Resistance to Illusions, Fear Manipulation, Fire Manipulation, and Poison Manipulation (Can increase his resistance to these effects with various items)

All previous, Immortality and Regeneration Negation with the Mortal Blade (Which can negate Types 2, 3, 4, 6, 7 and 8. It induces death to those who attempt to unsheathe it), Underwater Breathing (Type 2 with Mibu Breathing technique), Limited Mind Manipulation, (Via the Malcontent Ring. Can be used to drive beasts mad, and to torment apparition-type enemies, effectively stunning them for brief periods of time), Blood Manipulation (with Bloodsmoke and Bestowal Ninjutsu: Allows him to turn the spraying blood of a victim to smoke and wreathe his sword with the victim's blood), Body Puppetry (with Puppeteer Ninjutsu), Holy Manipulation (with Lazulite Sacred Flame, which is divine), Limited Smoke Manipulation (with Purple Fume Spark, can create blue smoke right before the firecrackers explode) and Damage Boost (If an opponent is blinded with Purple Fume Spark, for some time he will take bit more damage from the attacks), Shockwave Generation (Can create offensive shockwave slash with Dragon Flash)

Attack Potency: Small Building level (Defeated Gyoubu Oniwa, who can destroy wooden watchtowers. Defeated the Blazing Bull, who destroyed its own stable) | At least Building level (Fought evenly with Genichiro Ashina, whose attacks can utilize natural lightning), likely City Block level (Could pierce through the hide of the Great Serpent and kill it) | Town level (Fought the Divine Dragon, who can swing a giant sword with this much energy)

Durability: Small Building level (Can withstand the full force of Gyoubu Oniwa's charges, who can bulldoze through several wooden watchtowers without much effort. Can tank falls that would break bones, and withstand falls with moderate damage that would near-certainly kill a normal human. Can take hits from the Blazing Bull, who destroyed its own stable) | At least Building level, likely City Block level (Can take strikes from Genichiro Ashina and the Giant Serpent) | Town level (Can survive attacks from the Divine Dragon)

Stamina: Immense (Has traveled to numerous kinds of terrain and fought physically equal beings on his level in a single day, without exhausting himself. Can take on various superhuman and supernatural opponents without tiring, can traverse physically demanding terrain, such as the Sunken Valley and Fountainhead Palace without issue)

Intelligence: Genius in combat (In his lifetime, Wolf has been trained as a master shinobi by the Great Shinobi Owl and even bested him in combat even in his prime. He has beaten Genichiro and Isshin Ashina in his prime. Can learn and master numerous techniques throughout the game)

Weaknesses: Teleportation with Homeward Idol takes several seconds, in which he is vulnerable. Dying repeatedly causes the spread of a disease known as Dragonrot that afflicts those he associates with, and might cause him to lose consciousness for some time.

Homer Simpson (The Simpsons) Homer’s Profile (Speed was equal, Wolf was in his 8-C key)