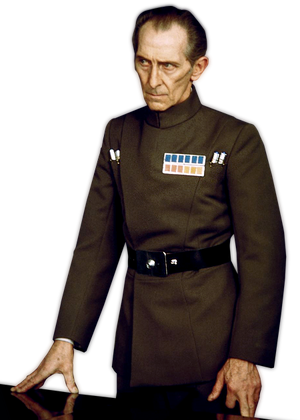 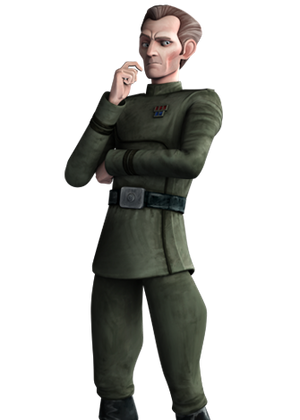 Wilhuff Tarkin was a human male member of the upper echelons of the Galactic Empire’s ruling hierarchy. Born in 64 BBY on the unforgiving Outer Rim world of Eriadu, young Wilhuff went through an upbringing under the influential Tarkin family which he described as “military”. Forged into a supremely fit human specimen and ruthless military leader by his right of passage on the Carrion Spike plateau and service with the Outland Regions Security Force, Tarkin would go on to live a life of great achievement and infamy. He would prove himself with the Galactic Republic’s Judicial Forces, later serve as Governor of Eriadu and take the world to prosperous new heights, and go on to serve as a Captain and later as an Admiral with the Republic Navy during the infamous Clone Wars of 22 to 19 BBY. During his career with the Republic, Tarkin would go on to form a deep friendship with Supreme Chancellor Sheev Palpatine, who had aided a young Tarkin during his academy days. He would also go on to form somewhat of a friendship with Jedi Knight Anakin Skywalker (which was tested during the Jedi Temple bombing incident and trial of Ahsoka Tano).

After the fall of the Jedi Order and establishment of a New Order, Tarkin would go on to become a Moff under the Galactic Empire. He would later ascend to Grand Moff and became essentially the second highest ranking individual in the empire; above even Darth Vader and just below Emperor Palpatine. Throughout the reign of the Galactic Empire, Tarkin would personally oversee the construction of the main body of the Death Star. When it was finished in 0 BBY, Tarkin had the battle station’s superlaser “tested” at the planet Jedha and later at the imperial held world of Scarif. He would later demonstrate the true power of the battle station by destroying the influential planet of Alderaan, which he knew was sympathetic to the Alliance to Restore the Republic. Tarkin would later command the Death Star to jump to the Yavin system after the Imperial Navy managed to find the location of the Rebel Alliance’s Massassi Group base. However, he and his precious battle station would perish in the ensuing Battle of Yavin; destroyed when a T-65B X-wing piloted by Luke Skywalker crippled the main reactor with MG7 proton torpedoes.

Tier: 9-C physically. 9-A with vibroknife and Force pikes. 9-A with blasters

Powers and Abilities: Peak Human Characteristics, Skilled Hand-to-Hand Combatant, Weapon Mastery (Is skilled with a variety of weapons such as knives, staffs, spears, pikes and is a highly skilled marksman), Genius Intelligence, Vehicular Mastery (An exceptional pilot whose skill impressed even Darth Vader)

Attack Potency: Street level physically (His years on the Carrion Plateau and training under his grand-uncle Jova Tarkin forged him into a peak human specimen. Even in his late 50s and early 60s, he was physically far more fit than trained soldiers less than half his age and capable of effortlessly overpowering them). Small Building level with vibroknife and Force pikes (They can easily cut through armor with this level of durability. They also ignore conventional durability to an extent). Small Building level with blasters (Wielded a DC-17 heavy blaster pistol during his days with the Republic Navy. Likely wielded an SE-14r light repeating blaster during his service with the Galactic Empire. Has also made use of military grade blaster carbines when needed)

Speed: Peak Human (Trained soldiers half his age find it difficult to keep up with him. Has proven himself to be almost as fit and fast as the Grand Army of the Republic’s Clone Troopers)

Durability: Street level by himself (Uninjured by a few metre fall onto solid rock; something which can leave even trained and fit soldiers far younger than him with sprained or broken ankles). Likely Small Building level against blasters (As a high ranking individual of the Tarkin initiative, he likely wears a composite plastoid vest underneath his uniform for protection. This kind of vest allowed Director Orson Callan Krennic to survive one shot to the chest from a heavy blaster pistol)

Stamina: Peak Human (Was not sweating and was quite active after making a trek which left a well trained and far younger human soldier short of breath)

Intelligence: Genius. Very well trained and highly skilled combatant. Is also an excellent pilot, with his piloting skills actually managing to impress Darth Vader (himself one of the greatest pilots in the galaxy). Was a top ranking student at the academies he attended. Was designing starfighters and light freighters in his mid teens. At the age of merely 18, he managed to outwit and capture a notorious pirate gang who had given far older and more experienced officers a difficult time. Has consistently proven himself to be a masterful strategist and tactician and also a competent detective/investigator. Darth Sidious and Darth Vader hold him in high esteem; with the former even going out of his way just to make plans to save Tarkin’s life (as men of his intellect and talents were absolutely vital to the Galactic Empire).

Note: This profile covers Wilhuff Tarkin as he appears in the “Disney” Canon only.