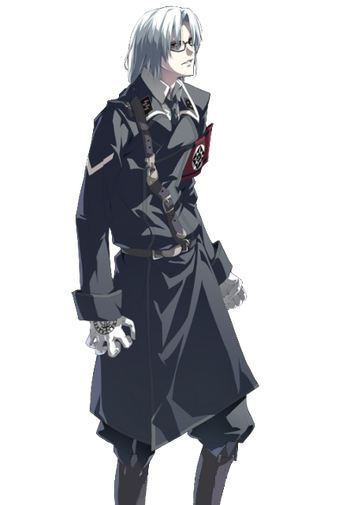 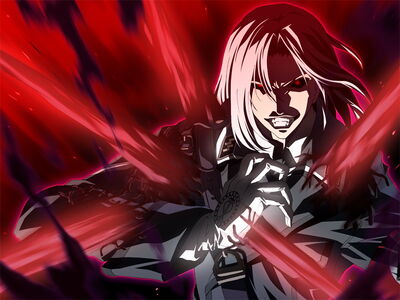 Powers and Abilities: Superhuman Physical Characteristics, Immortality (Types 1, and 3), Regeneration (Low-Godly, High-Godly within Gladsheimr), Self-Sustenance (Types 1, 2 and 3), Soul Manipulation (Can absorb and attack his enemies on a spiritual level), Law Manipulation (Briahs are described as the implantation of a new law into reality), Reality Warping (Briah is the act of a Die Ewigkeit user forcing their deepest desire on reality), Magic (Ewigkeit is a form of Sorcery that fuses the Soul of its user with a Holy Relic. in addition their attacks will become magical in nature), Enhanced Senses (Was able to perfectly hear a conversation going on from a hundred meters away. His vision is superior to night vision scopes and can see in the dark perfectly with no problems), Extrasensory Perception (Ewigkeit users have a "third eye" which allows them to see through a person's identity by viewing the color of their soul, and perceive invisible attacks such as Ren's Assiah), Transformation (Turns into a vampire when activating his Briah), Regeneration Negation (Up to Low Godly; Holy Relics carry a poison that hinder or negate regeneration of the soul), Non-Physical Interaction (Holy Relics can hit disembodied souls), Darkness Manipulation (His Briah creates a world of darkness capable of covering 500 meters around him regardless if it's day or night), Blood Manipulation (His Holy Relic, Qliphoth Bacikal, allows him to manipulate the blood of Vlad the Impaler flowing in his veins, usually in the form of stakes), Teleportation (Can teleport to any location as long as it is within his Briah), Danmaku (Can release tens of thousands of stakes in an omnidirectional way to overwhelm his enemies), Matter and Energy Absorption (Can absorb life-force, blood and souls. His absorption can also work on inanimate objects), Aura (His mere stare did this when he first met Ren Fuji. His sheer bloodlust is enough to manifest and break the floor beneath him and crack walls), Spatial Manipulation, Durability Negation (By directly attacking his opponent soul), Immunity to natural poisons and diseases, Resistance to Magic, Mind Manipulation (Was capable of fighting even in the presence of Methuselah), Soul Manipulation (Can endure attacks that can hit the very soul), and Ice Manipulation (unaffected by being bathed in liquid nitrogen which should have caused his cells to burst and turned him into an ice statue) | All previous abilities in addition to Acausality, Causality Manipulation, Regeneration (High-Godly; can regenerate from conceptual destruction), Conceptual Manipulation, Probability Manipulation, Abstract, Non-Corporeal

Attack Potency: At least City level+, likely Mountain level (The regular members of LDO are able to harm each other with only regular attacks. Explicitly stated to be far stronger than Keishirou Kyougetsu, who can cut apart mountains and pierce through whole mountain ranges with his attacks. Should be comparable to Tubal Cain), can bypass durability by attacking his opponent's soul | At least Large Planet level, likely far higher (Was able to fight evenly against Methuselah and destroy his Jaws of Darkness after being empowered by Reinhard) | High Outerverse level (Inhabits the same level of existence as a Hadou God)

Durability: At least City level+, likely Mountain level (The regular members of LDO are completely impervious to any weapon ever constructed by mankind, up to and including the Tsar Bomba. Far superior to Keishirou), regeneration makes him difficult to kill | At least Large Planet level, likely far higher | High Outerverse level

Stamina: Very High | Limitless (Has an endless amount of souls due to his connection with Gladsheimr, allowing him to fight forever) | Limitless

Standard Equipment: His Holy Relic, Qliphoth Bacikal (The blood of Vlad the Impaler)

Intelligence: Very skilled combatant with over 60 years of experience, single-handedly suppressed the military uprising in Warsaw

Weaknesses: When his Briah is activated, he is far more vulnerable to things that can harm vampires such as crosses, fire, and silver, and his heart works as a weak point that bypasses his Low-Godly regeneration. The more people are within his Briah range and the stronger their wills, the weaker his Briah becomes | None notable

Der Rosenkavalier Schwarzwald: (The Rose Bearer in the Forest of Death) Wilhelm’s Briah, type Hadou (Though with some features of Gudou), his desire being "I want to become a Vampire, invincible at night" and "I want the night to last forever". Upon activation, Wilhelm turns into a Vampire, and day turns to night in the area at a range of five hundred meters around him that contains a fake moon inside. Within the Briah itself, it allows Wilhelm to passively absorb energy from all that fall into the area of a black forest of bloody thorns. The trees wither and crumble, buildings are destroyed, and people begin to rot and weaken with each passing second, as their life and spiritual energy are sapped out of their being and absorbed by Wilhelm. At the same time, Wilhelm has no blind points within the forest, he can see, feel and hear every inch of space, can freely teleport wherever he wants, inhibit the senses of those in it, and can create spikes at any point in space (regardless if there is physical support or not). He is also completely undetectable within it, unable to be seen or sensed by any means, to the point that even his own soul is invisible to sense. Due to absorbing the energy around him, Wilhelm can also get faster and stronger as well as his regeneration ability increased to where he can regenerate any of his wounds almost instantly. He can even get more powerful if he activates his Briah while under the real moon by overlaying it with his fake one, making him more formidable of a being to fight and defeat. The only ways to get rid of this is if Wilhelm undoes his Briah, the fake moon is destroyed, or he dies.

However, when activating his Briah alongside his sister Helga, he can then use it in its purest and ultimate form. Through this, it creates an entire forest of bloody thorns that leave no safe spots to land and hide and even blocking off any possible exits in his Briah, forcing the target to constantly be on the move. The speed of his regeneration and absorption is also increased, as his wounds were instantly being healed from the hail of attacks from Wolfgang while also gradually taking the latters energy to make himself stronger and faster (though still incapable of truly keeping up with Wolfgang due to the latters ability to always be faster than him).

Avenger (Edmond Dantes) (Nasuverse) Avenger's Profile (Base Wilhelm was used. Speed was equalized, and both started in close combat range)