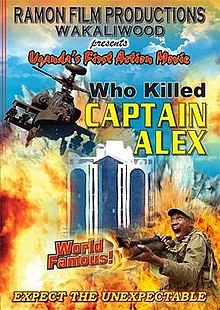 Who Killed Captain Alex? is a 2010 Ugandan film by Wakaliwood. The movie features Captain Alex; a highly trained soldier who is considered the best in Uganda who was sent by the Ugandan President to kill Richard and the Tiger Mafia forever. However he was later mysteriously murdered by an unknown person with his brother, Bruce U attempting to avenge him.

The Who Killed Captain Alex? verse isn't too remarkable. As most characters cap at Athlete level to Street level with a few powers/abilities.

However, despite their tiers. The strongest feat in the verse comes from a vehicle; A chopper. The chopper is capable of blowing up large buildings.

The most powerful character is the Tiger Mafia leader, Richard. Whose Tommy Gun is capable of easily blowing up choppers.

Start a Discussion Discussions about Who Killed Captain Alex?