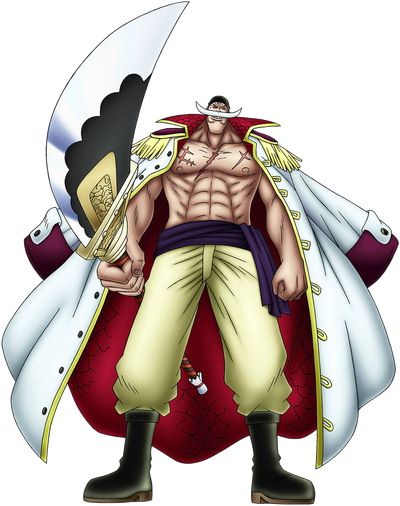 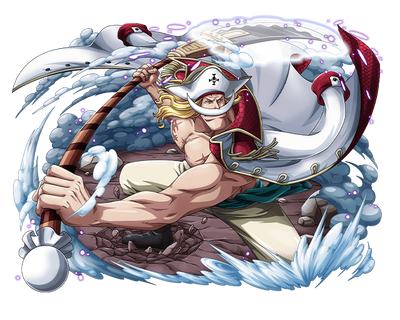 Edward Newgate, better known by his epithet "Whitebeard", was the captain of the Whitebeard Pirates and considered to be the most powerful of the Four Emperors ruling over the New World (the second half of the Grand Line), and the only person to have ever battled the Pirate King to a draw. With the death of Gol D. Roger, he became the "Strongest Man in the World", and this reputation made him the most feared and respected person in the world. However, 22 years had passed since the Pirate King's death and, although Whitebeard was still greatly feared, he was getting old and the world was slowly changing and new and ambitious individuals were looking to rise to the top and take his place. However, untill his very death at the hands of Marshall D. Teach and his crew, Whitebeard was still considered the World’s Strongest Man, all while being old and sickly, but still capable of defeating a marine Admiral.

Despite his stubborn and prideful attitude and fearsome reputation, Whitebeard has a strong sense of morality and honor and believes that all pirates should follow a moral code. He regards every member of his crew and of his 43 allied crews as a son or daughter; in turn, he is regarded as a father figure by all of them as well. As such, there is a strong sense of camaraderie and kinship amongst his crew, and Whitebeard is willing to go to great lengths to protect his "sons".

When people say that he has the power to shake the world, they mean it very literally, as he ate the Gura Gura no Mi, which has the power to generate massive, destructive vibrations, and trigger tsunamis and earthquakes.

Name: Edward Newgate, epithet "Whitebeard", "Strongest Man in the World", "The Man Closest to One Piece"

Powers and Abilities: Superhuman Physical Characteristics, Large Size (Type 0 - 6.66m), Haki (At least Proficient Kenbunshoku, Advanced Busōshoku and Proficient Haōshoku Haki), Expert Bisento Wielder, Vibration Manipulation (Can create powerful shockwaves through any medium with the power of the Tremor-Tremor Fruit), Air Manipulation (Was able to casually blow out the "flames" on a magma rock. With the swing his bisento, can generate powerful air pressure with his attacks and create cyclones to blow away enemies), Water Manipulation (His shockwaves are able to create large tsunamis), Weather Manipulation (His shockwaves are able to affect the sky, bringing great storms) and Earth Manipulation (With his power he can tilt the ground), Limited Durability Negation (His vibrations can pass through the bodies of opponents, affecting them internally), Resistance to Heat (Was not bothered by the ambient heat Akainu let off in his magma form and resisted direct magma attacks, albeit with eventually fatal burn injuries) and to Ice Manipulation (His vibrations are strong enough to prevent being encased on ice), High Pain Tolerance

Attack Potency: Country level (Presumably stronger than his old self) | Country level (Created a tsunami this powerful with one of his earthquakes), can negate durability with internal vibrations.

Speed: Relativistic+ (Faster than his old self, as Marco stated that he would had no problems dealing with surprise attacks) | Relativistic+ (Should be faster than the 3 Admirals. He managed to outspeed Aokiji from meters away, and could dodge and deflect attacks from Kizaru and Akainu)

Durability: Country level (Able to fight with his late rival, Gol D. Roger for three days and nights) | Country level (Scaling from his Attack Potency. It took the combined efforts from all three Admirals to do sufficient enough damage to Whitebeard to weaken him to the point in which Blackbeard could harm him. However, he did not die until after the Blackbeard pirates combined their efforts and attacked him in tandem only after Akainu had already taken part of his head, and put a hole in his abdomen, having already put him in a severely weakened and lethargic state)

Stamina: Marvelous, despite his old age and illness. During the Marineford Battle he continued to do battle while accumulating injuries and literally had taken 267 sword wounds, 152 gunshot wounds, and 46 wounds from cannon balls. The sum adds up to a total of 465 hits, most significantly those he received from Akainu and Kizaru, and even soldiered on after having half his head taken by Akainu. Weaker characters with less endurance were also able to continuously battle one another for ten days. Back at his prime, fought with Roger in an all-out battle between the two pirate crews during three days and three nights, although it's hinted they took rests during the battle.

Range: Extended melee range to several meters with his bisento, at least several hundred meters with air quakes (can also indirectly generate effects much further than that, at the very least hundreds of kilometers away)

Standard Equipment: His bisento “Murakumogiri” (a halberd resembling a glaive, with a long, heavy half and a heavy, curved blade)

Intelligence: Whitebeard is the pirate closest to obtaining the "One Piece" treasure in the entire world, and along with a couple of decades worth of experience, is the single most-dangerous pirate in his world. He has sufficient leadership qualities to oversee a last-minute invasion of Marineford, an incredibly skilled military strategist, and a match for Sengoku the Buddha. His tactical prowess was demonstrated when he scattered the pirates so that they wouldn't be routed by Pacifista, or when he bypassed the siege wall and has mastered his Gura Gura no Mi

Gura Gura no Mi (Tremor-Tremor Fruit): Whitebeard ate the Tremor-Tremor Fruit, turning him into a "Tremor Human" that can create incredibly powerful shockwaves through virtually any medium, including air, land, and the seafloor.

Notes: The discrepancy between his name and appearance is apparently due to the fact that the Japanese language only has one word for facial hair. Prime Whitebeard was exaggerated to be a life wiper though this is generally accepted as hyperbole. His powers in his prime state were never shown properly.