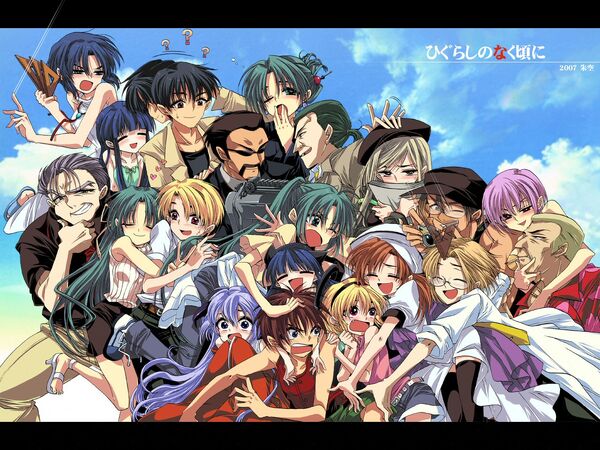 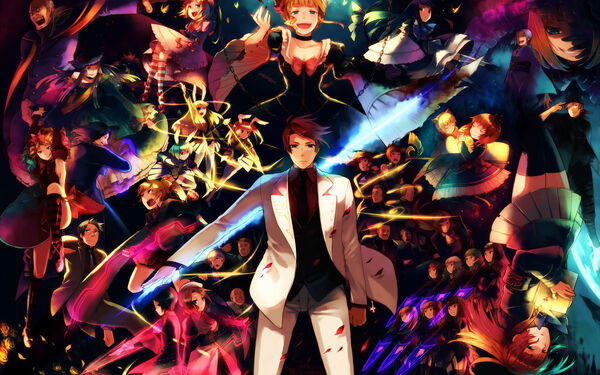 When They Cry is a metaseries created by Ryukishi07 and 07th Expansion.

Higurashi takes place in 1983, in the small town of Hinamizawa. Keiichi Maebara moves to the town, befriending his classmates. The village appears to be simple, peaceful, and quiet - however, this ends after the annual Watanagashi Festival, a celebration to give thanks to the local god, Oyashiro. Keiichi that every year for the past four years, one person has been murdered and another has gone missing on the evening of the Watanagashi Festival, and is soon drawn into the strange events surrounding the Festival.

Umineko takes place in 1986, during the timeframe of October 4th and October 5th. It starts off on the island of Rokkenjima, owned by the eccentric business Kinzo Ushiromiya. There, the family conference for the Ushiromiya family is taking place, where it will be decided who will get the nearly dead Kinzo's inheritance. However, a typhoon traps the family members on the island, and over the night, strange things start to happen and people start dying.

When They Cry is one of the most powerful verses out there, with even low tiers possessing universal feats and high-level conceptual manipulation. Stronger characters are comfortably hyperversal, with even the weaker ones having the power to dwarf, control, and merge fragments, containing infinite possibilities and multiple dimensions. The strongest characters are boundless, having transcended the normal hierarchy of witches and reached the top.

Explanation of the Cosmology

When They Cry’s cosmology is generally known as the Infinite Hierarchical Abyss. It contains infinite higher worlds, being a sort of infinite ladder with infinite steps (called endeavors) that leads down to an infinite, bottomless abyss.

Humans are the lowest existence in this hierarchy, tossed around by fate. Witches are somewhere in the middle, possessing the power to toy with fate, but accept certain limitations and restrictions to prevent themselves from being lost.

The being that stands at the top of the Hierarchical Abyss is the Creator. This being is boundless and lacks any restrictions, technically lacking even a meaning and an existence.

Beatrice’s “cat box”, which contains the entire story of Umineko, is an endless world containing endless stories, maintained by Beatrice. However, even this world is only a single fragment in a Sea of infinite fragments, and beyond this territory exists even greater worlds. Beatrice’s world itself contains several lower and higher worlds, however.

A Game Master creates a tale - a gameboard - by combining elements of different fragments. Even a single fragment in Beatrice’s catbox is an infinite world with infinite possibilities, and Beatrice’s world contains infinite fragments.

This gameboard manifests a certain possibility, but even it contains lower gameboards;

In the game that represents the inside of Onee-chan's head, Sakutarou certainly does exist, and is a piece which always stays by her side. Though he's nothing more than stuffed animal in the real world, on Onee-chan's game board, he is a full piece, no different from any other pieces.

as well as alternate possibilities:

Beatrice: "H, hm. ......For example, perhaps you could say these worlds are very close like parallel lines. The worlds are nearby, but because they are parallel lines, they will never cross. For the time being, you can view that world in such manner."

Beatrice’s world contains several worlds higher than the gameboard and its own sea of possibilities;

Erika: "Detective's authority. ....The detective has the right to inspect all crime scenes. Stand back, Ushiromiya Battler. This is an official right of the game, which human side has acknowledged." Those words, which seemed to be ridiculous at first. ......were words of power which had come from a world on a much higher plane than the one they were in.
It was a document with the power to proclaim to the beings of higher world that Sakuratou had most certainly materialized in the human world. Sakutarou, who had been created by Maria, was nominated by the two Witches Beatrice and Virgilia, and just now, his existence had been acknowledged by the higher world.
......That itself was the great magic of materialization. According to Beato, it was apparently quite fortunate that Virgilia was there.
Because depend on the number and quality of witches that signed the proclamation to the higher world, the power resided in it could change drastically. Virgilia in particular had many friends in the higher world, so her signature gave the proclamation a power with which Beato's couldn't even compare.

In short, even the lowest world (that of humans) contain infinite possibilities and higher dimensions, and each higher layer stacks more and more on top of that.

Witch: A being that exists above humans, capable of creating and toying with fate. A witch can and will return from “death” (or non-existence) the moment they start thinking.

The Creator is the highest level of witch. A witch that has transcended all restrictions and has become truly boundless, but in the process, has lost all meaning.

More information can be found in this respect thread.

Start a Discussion Discussions about When They Cry