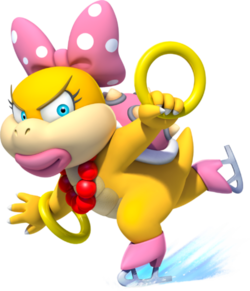 Wendy O. Koopa is one of the members of a clan composed of elite warrior siblings known as the Koopalings and the sole female of the family. She had always taken high delight in her femininity, shown to be elegant via her emphasis on skating, swimming, and aquatic combat and has an arrogant and vain demeanor with difficulty in admitting defeat, likely due to her high ranking position or said feminine qualities mentioned earlier. Despite this, she has shown to be tough with tomboyish qualities as well. Like most of the Koopalings, she is named after a famous musician. She's named after the songwriter, actress, lead singer of the punk rock band Plasmatics, Wendy Orlean Williams.

Age: Unknown, likely around her teens

Speed: Massively FTL+ (Has been able to keep up with the Mario Bros.)

Intelligence: Above Average (Is an expert in kart racing and skating and has a doctorate)

Weaknesses: Wendy can be quite arrogant and have shown to have quite a temper.

Retrieved from "https://vsbattles.fandom.com/wiki/Wendy_O._Koopa?oldid=6173004"
Community content is available under CC-BY-SA unless otherwise noted.