VS Battles Wiki
Register
Don't have an account?
Sign In
Advertisement
in: Tier 9, Tier 9-B, Statistics Amplification Users,
and 18 more 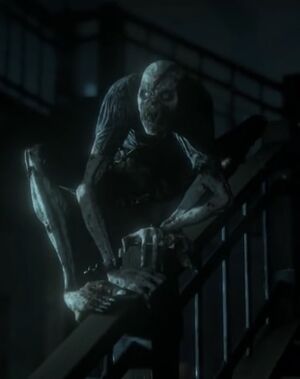 The Wendigos are one of the two main antagonists in Until Dawn.

They were humans who have been changed by a Native American spirit into cannibalistic monsters after they ate the flesh of other humans around the mines, due to starvation.

It is unknown how long they have lived in Blackwood, but it is suggested they've been around since 1952, due to the cave in.

Long ago, a Native American tribe known as the Cree, preserved the Blackwoods as well as its wildlife, believing it would anger the mountain and unleash the Wendigo curse, what they call "A creature born from ice."

Age: Varies, but all the ones that appear are adults who were up to 80 years old

Powers and Abilities: Superhuman Physical Characteristics, Enhanced Senses (Thermal vision and hearing), sharp claws and teeth, Stealth Mastery, Vocal Mimicry, Immortality (Type 6 and possibly 7; The soul of a Wendigo remains attached to a host, when it is freed, it will remain looking until it finds another host. They are considered undead entities by character's like The Stranger.), Longevity (The Makkapitew was known to live for around two generations, hunted by the grandfather of the Stranger who was in his early 50s), Possession (A Wendigo can possess those who are desperate or crave food. The soul of the Wendigo will also possess a human fully when they have resorted to cannibalism in the mountains), Statistics Amplification (They grow stronger when they feed), Pseudo-Surface Scaling, Resistance to Pain and Cold Temperatures, Incorporeality (In spirit form) and Corruption (Can transform cannibals of Blackwood Mountain into Wendigo) for the Wendigo Souls

Speed: Superhuman (One of them can easily outrun a wolf. They can catch and kill elk.)

Durability: Wall level (Can repeatedly tank shotgun fire, which is only able to stagger them)

Stamina: Superhuman (They chased the protagonists for nearly an entire night and they didn't show any signs of getting tired)

Intelligence: Average (As they've once been humans, they're fairly intelligent hunters, employing know-how such as mimicking their target's friends, using phones as a lure and even slashing support cables at the radio tower to get to prey.)

Weaknesses: As their vision is based on changes in movement, they cannot see targets who are completely still, and their armored skin is weak to fire.