VS Battles Wiki
Register
Don't have an account?
Sign In
Advertisement
in: Characters, RWBY, Female Characters,
and 48 more 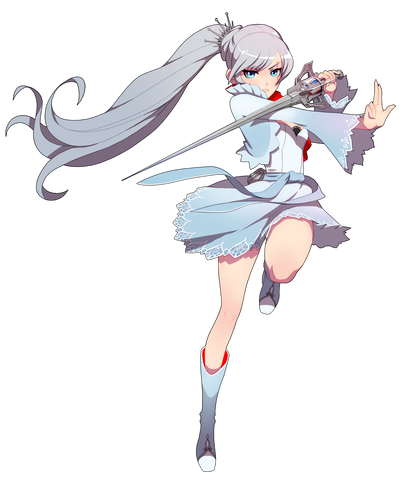 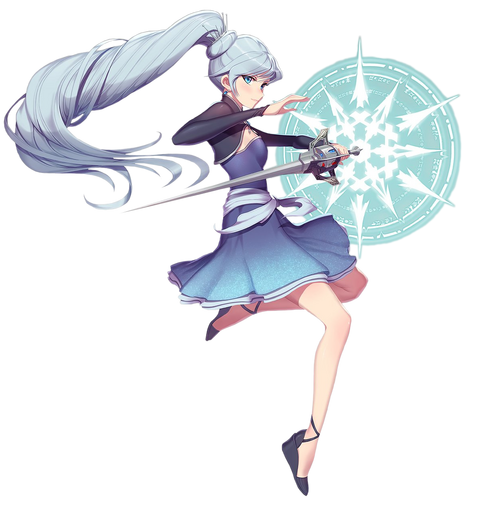 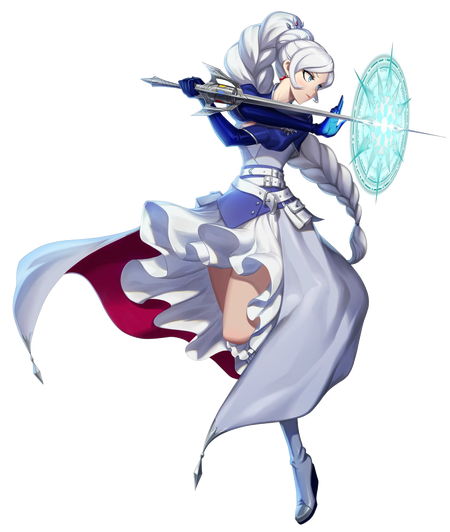 Weiss Schnee is the second member of Team RWBY. Her weapon is a Dust revolver/rapier named Myrtenaster, and her semblance allows her to create magical glyphs in battle. At 17 years of age, she is an heiress to the Schnee Dust Company, a corporation famous for its sometimes shady business dealings, dangerous practices, and mistreatment of its Faunus laborers. Both the Schnee Dust Company and the Schnee family have been targets of the White Fang terrorist organization for years, leading to Weiss' inherent distrust of the Faunus. Weiss chose to become a Huntress over taking a job at SDC to restore her family's honor, as her father caused the company to decline. At the start of the show, she was shown as self-centered, standoffish, and an obnoxious know-it-all, but has matured somewhat throughout the show. She has a noticeable scar over her left eye, which she is assumed to have acquired in a fight against a living suit of armor in the 'White Trailer'. As of Volume 4, she is the former heiress of the Schnee Dust Company.

Superhuman Physical Characteristics, Aura, Forcefield Creation (Aura can be used as a full-body forcefield), Statistics Amplification (Can use Aura to enhance her striking power), Enhanced Senses (Can use her Aura to sharpen her senses), Regeneration (Mid-Low), Acrobatics, Forcefield Creation, Vector Manipulation, Limited Time Manipulation,[1] Explosion Manipulation,[2] Light Manipulation,[3] and Gravity Manipulation[4] via Glyphs, Dust Manipulation (Includes Ice[5], Fire[6], Wind[7], Earth, and Electricity), Stunning, Restraining and Flash-Freezing, Weapon Mastery (Expert Rapier User), Weapon Creation (Can make swords out of ice), Homing Attack, Energy Projection, Healing, Summoning, Plant Manipulation (Can use Plant Dust to manipulate plants in the area), Resistance to Extreme Heat and Cold (Aura protects the user from sub-zero temperatures, allowing them to be encased in ice without being cold, walk through a blizzard in casual clothing, and traverse the kingdom of Atlas, which resides in Remnant's North Pole, without wearing any protective gear, as well as extreme heat up to and including the heat of flames, being blasted with steam, and being submerged in lava without being burned)

All previous plus Teleportation (Can teleport her summons[8]), Size Manipulation (Able to change the size of her summons[9])

Attack Potency: Large Building level (Comparable to her teammates. Can hit Nora Valkyrie with enough force to generate a small shockwave[10] and pierce through a Boarbatusk), higher with Dust (Immobilized and overpowered attacks from a Nevermore[11], Created a barrier of ice that protected all of her teammates from a large explosion that wiped out the roof of an entire tunnel[12]. Temporarily immobilized a Death Stalker[13], which is strong enough to pierce its hide and can tank attacks from several students combined) and Summons (Can summon the arm and sword of an Arma Gigas, which was said to be on the same level as a Prototype Atlesian Paladin) | Large Building level+ (Performed this feat), higher with Dust and Summons (She can summon a Queen Lancer[14] as well as her full Arma Gigas, which killed a Queen Lancer[15] and can slice a true Atlesian Paladin apart with relative ease[16]) | At least Large Building level+ (Far stronger than before. Froze and shattered the Grimm Sphinx's wings[17], helping Qrow Branwen and Ruby Rose kill it. Comparable to Ruby, who could stagger the Atlesean Colossus with her attacks), Multi-City Block level with Dust (Was able to knock over the Atlesian Colossus with Ice Dust) and Summons | Town level (Can fight on par with the Ace Ops at the end of Volume 7, who could fight Penny Polendina in Volume 8, who could do this), higher with Dust and Summons

Durability: Large Building level (Survived a serious hit from Nora Valkyrie which sent her flying across the room[20], and took hits from a Boarbatusk[21]), higher with Ice Dust (Her Ice Dust is durable enough to restrain a Nevermore and Death Stalker and is superior to the Ice Dust used by other huntsmen and huntresses i training such as Ruby, Blake, and Neon) and Aura (Aura functions as a forcefield with a cumulative durability, depicted as a 'health bar', and allows her to take dozens of hits from opponents as strong as herself without any significant injury) | Large Building level+ (Able to fight extensively and on par with the likes of Mercury and Emerald at this point), higher with Ice Dust and Aura (Able to take a few hits from Vernal before her aura was completely depleted[22]) | At least Large Building level+, higher with Aura and Ice Dust | Town level, higher with Aura and Ice Dust

Stamina: Average (As seen after the fight with the Nevermore, when the other three girls showed no signs of fatigue, Weiss was exhausted. However, this may be attributed to the repeated use of her Semblance)

Intelligence: Gifted. As the heiress of the Schnee Dust Company, Weiss was raised from youth to strive to be the best in all she did, and combat was no exception. As a testament to her skills, Weiss was listed as the top ranking of the sparring class during the events of the Vytal Festival. Weiss can move quickly and is creative on the battlefield, particularly with Ice Dust, although she is proficient in several different elements. She can use them both on their own and incorporate them into her Glyphs and can rapidly switch between several different elements in rapid succession without faltering. She claims to be the smartest girl at Beacon Academy, and though this may be an exaggeration, she has demonstrated a great deal of knowledge in the classroom, even going so far as to go out of her way to learn things even if they don't pertain to the topic at hand. Weiss also mastered summoning in a relatively short time despite being completely unable to do so and believing she was incapable of doing so prior.

Weaknesses: She is usually stubborn and prideful on several occasions. Has not yet mastered her summoning. Continual damage to her Aura will cause it to decay to the point where she can be left open to more significant damage. Aura's durability is cumulative; it will deplete with each attack she takes and can be brought down by characters of similar strength. Semblances drain aura by a small amount and without aura they cannot be used until the user's aura is recharged. | Stronger summons such as the Arma Gigas take a few seconds to be fully summoned (Though she can summon parts of them instantly) 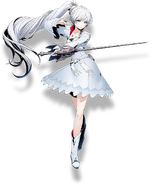 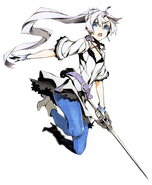 Weiss in the manga

Weiss in the Bilibili Mobile Game 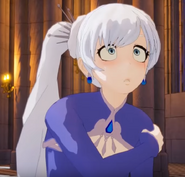