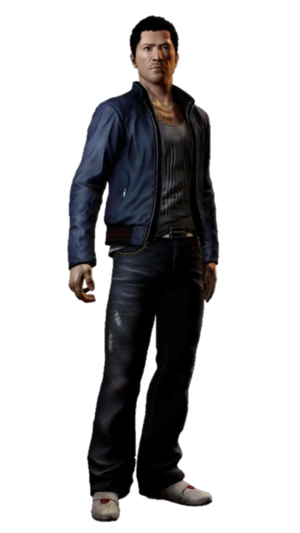 Wei Shen is an police officer who goes undercover to avenge the death of his sister and bring down the Triad. He will stop at nothing to defeat them and will make immoral decisions if necessary. He is violent and is willing to kill to accomplish his goals.

Powers and Abilities: Superhuman Physical Characteristics, Martial Arts Mastery (Knows a large amount of techniques, and styles), Multilingualism (Can speak in Chinese and English), Social Influencing (Convinced a thug he was drunk. Went undercover as a gang member. Convinced Winston and other gang members that Ming was a traitor. Has changed Winston's mind on how to approach situations), Regeneration (Mid-Low, can easily heal broken bones and large holes in a matter of seconds), Expert acrobat and parkourer, Hacking, Resistance to Poison Manipulation (Was able to fight while heavily poisoned), Extreme Pain Tolerance, Weapon Mastery (Is an master user of nearly every type of weapon), Vehicular Mastery (Can drive various cars ranging from boats to bikes), Statistics Amplification, Rage Power and Fear Manipulation with the Face Meter | All previous abilities to considerably higher extents, Magic and Fire Manipulation

Attack Potency: Small Building level physically, higher with most weapons (Can kill multiple people in one hit, is capable of easily blowing up armored trucks with just a single clip from most of his handguns and at times a single shot) and explosive weapons (Can destroy armored vehicles, boats, big buses in one shot and cause large explosions, and can destroy the DZS-90. Most of the explosives are on par with most of the firearms in the game), even higher with the Face Meter | At least Small Building level, higher with the Face Meter

Speed: Subsonic (Can fight large groups of armed thugs and blitz them without issue, can see people fall and move in slow motion. Moves too fast for even peak human fighters to perceive. Can cover great distances in a single leap when action-hijacking vehicles. Is capable of kicking someone mid-air several times before they hit the ground), Supersonic+ with his Focus ability (Can see bullets move far slower, and is able to dodge them, although explosions are still too fast for him to counter. Rifles in the game are heavily based on the Heckler & Koch G36), higher with the Face Meter. Subsonic+ (Uses Agent 47's Silverballer, which is essentially a custom AMT Hardballer, an M1911 made entirely out of stainless steel) to Supersonic+ with most firearms (Uses these weapons) | At least Subsonic (Far swifter than before), at least Supersonic+ with his focus ability (Should be considerably faster than before), higher with the Face Meter

Lifting Strength: At least Class 1 (Is able to lift, flip and slam heavyset fighters, is capable of lifting a metal roller door bigger than him, and is able to force open a closed elevator door, can slam metal shutters hard enough to cause sparks, can easily perform strenuous parkour moves. Snapped Zhang's neck with just grip strength, which would require forces in excess of 1,250 lbs. Can easily snap bones with his bare hands just by bending them. Can send multiple humans flying into the air with a single kick. Can move cars and trucks with his kicks), higher with the Face Meter (Can overpower enemies he previously couldn't) | At least Class 1 (Far stronger than before, can overpower demons of comparable strength), higher with the Face Meter

Striking Strength: Small Building Class (Capable of breaking bones easily. Can effortlessly snap necks. Can easily kill multiple people with a single kick. Can even dent metal on heavily-armored trucks. Is able to slam people so hard it damages the floor. Can easily jump several meters with a single leap even when badly injured. Capable of smashing car windows with just a casual elbow. Can easily destroy telephone booths, tables, doors, metal railings, gigantic fish tanks and other objects just by casually slamming his enemies' heads into them. Can move cars with his kicks, is capable of slamming a metal shutter hard enough to cause sparks and completely deform it. Capable of easily demolishing doors, thick tables and other furniture. Capable of trading blows with people who can hurt him), higher with the Face Meter | At least Small Building Class (Is capable of fighting large demons who are able to give him significant damage), higher with the Face Meter

Durability: Small Building level (Tanked a shotgun blast to the chest, survived being at the epicenter of a big boat explosion that destroyed a boat gas station right afterwards and swam to the nearest shore with only his chest wound being visible, with explosions involving massive oil tankers being able to easily vaporize humans. Can survive car crashes that send him flying through the windshield, can survive being hit into walls by speeding cars, and massive explosions that can send him flying several feet back. Capable of tanking his own grenades at point-blank range, which can one-shot cars. Can tank vehicles like buses exploding beneath his feet, can survive being burned for extended periods of time, regularly takes high-caliber rounds that can easily penetrate armored steel and one-shot cars, at point-blank range and still emerges fine. Also regularly tanks high falls that would break a normal man's bones), higher with the Face Meter (Can take considerably more damage than his base). His regeneration only takes seconds to complete | At least Small Building level (Is capable of taking on powerful magical beings), higher with the Face Meter

Stamina: Extremely High (Can fight after being tortured for hours by the triad's best torturer, and is capable of running after being grievously wounded with multiple broken bones, deep cuts and whatnot, easily fought and defeated multiple highly-skilled fighters while poisoned without any loss to his statistics overall)

Intelligence: High (Was able to infiltrate Hong Kong's most notorious Triad and weaken them, and was also able to stop the cultists, and is the best martial artist in the world, is also noted for his overall ruthlessness and his capability of keeping a composure even during heated situations)

Note: Not to be confused with Wei (Image Comics) or Wei Zhijun