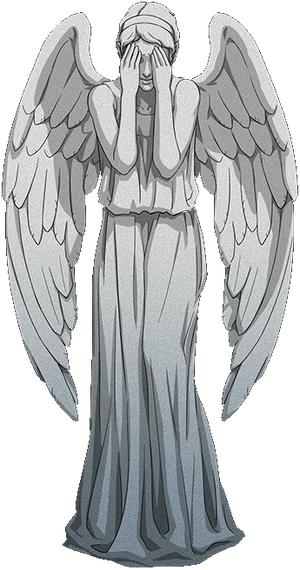 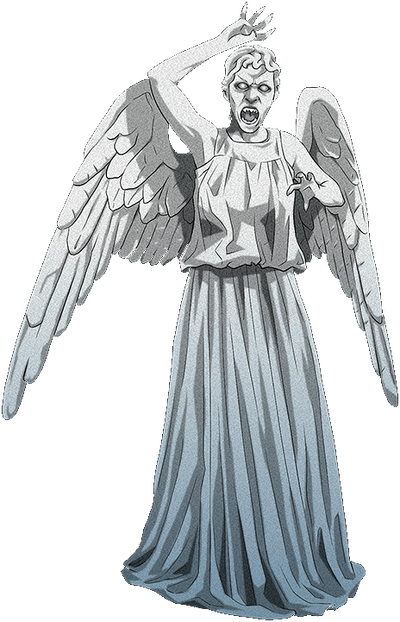 These creatures known as the Weeping Angels have existed around the beginning of the Universe and have survived because of their unique defence mechanism. Although they appear to be weeping, they are in fact trying not to look at each other hence their nickname The Lonely Assassins.

Gender: Unknown (True Form), Appears as Male or Female depending on the statue

Age: Varies (Individually), Around 13 billion years as a species (Said to evolved around the beginning of the universe)

Powers and Abilities: Superhuman Physical Characteristics, Flight, Time Manipulation (Can send people backwards in time through touch. While observed, they are quantum-locked in time), Energy Manipulation, Size Manipulation (Can shrink and grow to their normal size), Life and Energy Absorption (By sending people back in time, they draw upon the potential energy of a life that didn't occur. Can drain the life from humans, reducing them to dust, and draw upon electricity and radiation. According to The Doctor, they could feast upon the power of his TARDIS), Technological Manipulation (Changed a lock to be deadlock sealed), Enhanced Senses (Can see in the dark), Sound Manipulation ("Angel Bob" stole the voice of one of the clerics and used his voice to talk to the Doctor), Mind Manipulation (Manipulated the locals of an Italian village to free itself), Immersion (Can inhabit images), Transformation (An image of an angel will transform into an angel itself. Staring into the eyes of an angel transforms humans in a matter of minutes) and Power Bestowal (An Angel had the power to spread its powers to an ordinary statue by touching it), Regeneration (High-Mid; Reformed after being blown to pieces), Immortality (Types 1, 2, 3 and 6), Telepathy, Illusion Creation (Can trick people into thinking that their body parts are stone)

Attack Potency: Varies (Can seemingly take the form of virtually any type of statue). Typically Wall level (Even while heavily weakened by starvation, Weeping Angels can easily snap human necks and break bones. Multiple starved angels destroyed wooden pillars), up to Large Building level (The largest Weeping Angel seen was the Statue of Liberty). Can bypass conventional durability with Life Absorption and Transformation

Speed: Below Average Human (Can't move when being observed). Subsonic+ when not observed (Fast enough to move across large distances in the space of a single blink)

Lifting Strength: At least Class 1 (The Angels were very strong, being able to break through steel doors, force magnetised wheels to turn and snap victims' necks without difficulty), possibly higher (Four Angels could rock the TARDIS back and forth, shaking the inside of it as well. Four angels outright lifted the TARDIS)

Durability: Varies. Wall level (Seemingly a normal statue physically; can be damaged by bullets and grenades, although these angels were starving), up to Large Building level. Unknown when not observed (Survived falling through space in the past)

Stamina: High, Likely limitless if well-fed (Don't appear to be able to get exhausted)

Weaknesses: They cannot move when they are being directly observed. Often tend to toy with prey, need to feed to become stronger/faster (although this makes them less likely to toy with their prey), mirrors and paradoxes. Two or more angels observing each other can never move again.

Note: Weeping Angel haven't been killed by conventional means before.

Thomas the Tank Engine (Thomas and Friends) Thomas’ Profile (Note: Angel started on tracks and Thomas was 9-B and 20 meters away)

Ennard (Five Nights At Freddy's) Ennard’s Profile (Speed was Equalized, Both were 9-B, the Angel started well-fed)