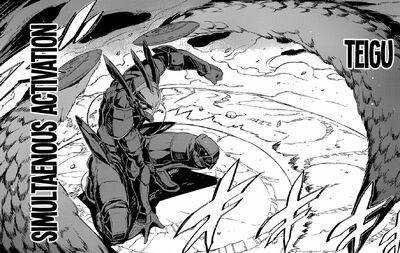 Wave is a former member of Imperial Navy and a member of the Jaegers under General Esdeath's command. Armed with the Teigu Grand Chariot, he loyally defends the Empire and his comrades while remaining largely unaware of the country's darkest aspects, growing especially close to Kurome in the process.

Attack Potency: Large Building level (Is comparable to base Tatsumi, clashed with a casual Susanoo) | Small City level+ (Managed to trade blows with EoS Akame, as well as Evolved Incursio for a time. Grand Chariot is said to have better overall stats than Incursio) | At least Small City level+, likely higher (Was able to knock back Shikoutazer's head and is comparable to Winged Form and 3rd Form Incursio)

Durability: At least Large Building level (Survived being launched a few kilometers by Susanoo) | Small City level+ (Managed to tank EoS Akame's strikes without too much damage, took a direct blow from Evolved Incursio and survived) | At least Small City level+, likely higher. Unknown with Mastema's trump card (The extent of its ability to reflect attacks is unknown)

Stamina: Extremely high (Was able to take life-threatening injuries and showed no signs of fatigue or pain after fights. Was also able to dual wield two Teigus, with no noticeable effect. Also worth noting that he is the only character in the series to do so).

Intelligence: Very high, accomplished assassin and battle combatant (Was able to read Syura's moves which Budo stated to be a mixture of martial arts from around the world)

Weaknesses: If he gets angry, his moves become less polished | The area behind the kneecaps is weaker than the rest of the armor | Due to the strain put on his body, Wave can only use both Teigu after a few days of rest

The effect of Grand Fall Flügel

Wave with both Grand Chariot and Mastema.