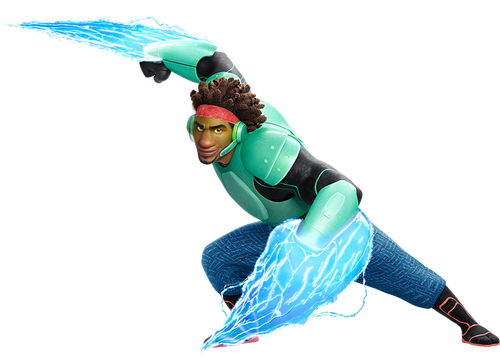 Wasabi is a major character from Disney's 2014 animated feature, Big Hero 6. He is an applied physics student at the San Fransokyo Institute of Technology, and a member of Big Hero 6. Despite his burly physique, Wasabi is neurotic and compulsive.

Out of all his friends, Wasabi is arguably the most grounded and appears to be the one with the most common sense. Wasabi is overly a "by the book" kind of person, strictly following rules and believes in using law and order as a way of going about everyday life.

Tier: 10-A physically, 9-A with Plasma Blades

Age: Unknown, though he is a college student.

Speed: Supersonic+ reactions and attack speed (Can react to and guard against the microbots)

Lifting Strength: Athletic Human (Should be comparable if not superior to Honey Lemon)

Intelligence: Genius (Wasabi is a brilliant Applied Physics student at one of the most prestigious universities in the world. He engineered his own laser-induced plasma field and figured out a way to wield them as a weapon. He is fluent in both English and Spanish, and he has demonstrated the ability to think creatively and extemporaneously.)

Weaknesses: A bit neurotic and compulsive.