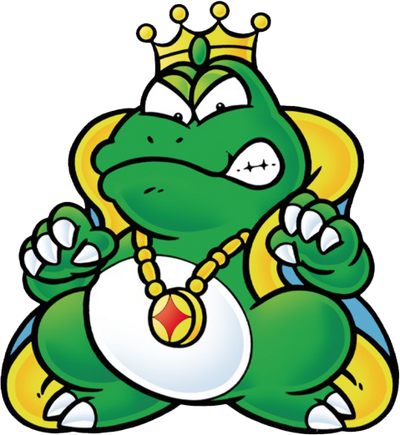 Wart, known in Japan as Mamu, is the main antagonist of Super Mario Bros. 2, or Yume Kōjō: Doki Doki Panic. He hijacked the Dream Machine and used his army of 8-Bits to conquer Subcon, the land of dreams. The citizens from there call out to Mario to help defeat him. He has a different backstory in Doki Doki Panic.

Origin: Mario Bros, (Had a cameo in The Legend of Zelda: Link's Awakening)

Powers and Abilities: Superhuman Physical Characteristics, Can spit bubbles and jets of water, Dream Manipulation, Summoning/Creation with the Dream Machine

Speed: Massively FTL+ (Can easily keep up with the 4 heroes of the game)

Striking Strength: Multi-Solar System Class (Can hurt the main cast by just bumping into them)

Durability: Multi-Solar System level (Conventional damage from the four heroes did nothing)

Intelligence: Above average, as he staged a takeover of a kingdom.

Weaknesses: Has a distaste for vegetables, so much so that it's physically harmful.