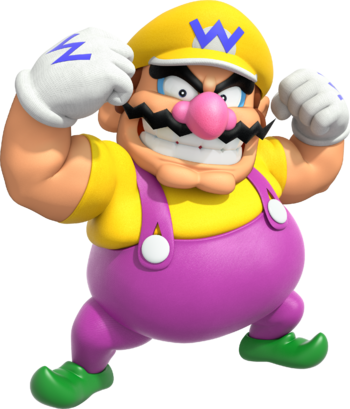 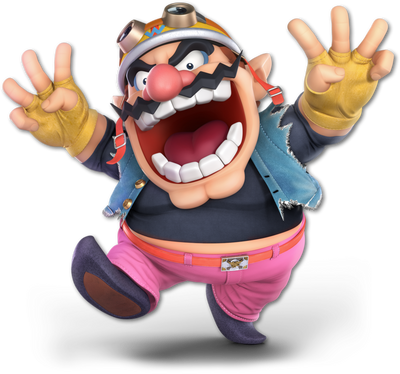 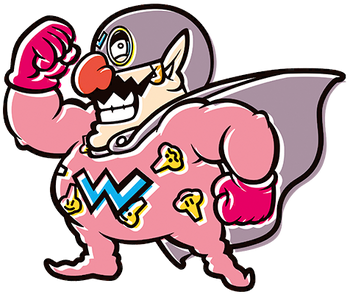 Wario (Japanese: ワリオ, Wario) is a recurring character in the Mario series. He is an obese, muscular, hot-tempered, and greedy man, and Mario's yellow-and-purple clad arch-rival. He usually appears as an antagonist, or in some cases an anti-hero. His name is a combination of Mario's name and the Japanese word warui (悪い), meaning "bad". Wario's greed pushes him to commit malevolent acts, such as the seizing of Mario's castle. Wario has also proven to be very cunning as he has tricked Mario on many occasions. He often goes out on his own adventures, from stealing treasure to running a microgame making company. Wario has helped heroes of the Mushroom Kingdom on a few separate occasions as well.

Lifting Strength: At least Class 10 (Capable of lifting and throwing DinoMighty, who is larger than an adult elephant) | Pre-Stellar (Stronger than Mario)

Intelligence: Varies between Below Average and Extraordinary Genius depending on the area. While he's often portrayed as simple-minded, Wario can create inventions in a brief period of time, such as an inter-dimensional travel device in order to enter a TV show's reality. Although not having previous software experience, Wario started Wario Ware, Inc. and his first minigame release was a huge financial success. Wario's shown to be a skilled pilot, being able to operate space ships, fighter jets, biplanes, motorcycles, go-karts, attack submarines, and mechas. Furthermore, Wario was able to conquer Mario's realm by hypnotizing all of its people and even potential players through a magic spell into turning against their hero.

Weaknesses: Wario is extremely greedy and sometimes lets his nature overtakes him, causing him to go out of control occasionally, even going as far as to double-cross his friends. Wario-Man's strength and speed randomly change every time he transforms and he can even be weaker than his normal self, to a point where he unable to break a toaster with his bare hands. Because of his hot-headed and clumsy personality, Wario doesn't consistently use his intelligence to the fullest as he's been easily tricked and hardly ever uses strategy.

Key: Wario Land Series (Land, World and Master of Disguise) | Composite | When powered up by a Power Star

Waluigi (Mario Bros) Waluigi's Profile (Both were at High 4-C, speed was equalized and both were bloodlusted)