VS Battles Wiki
Register
Don't have an account?
Sign In
Advertisement
in: Verses, Warhammer 40,000, Games,
and 3 more 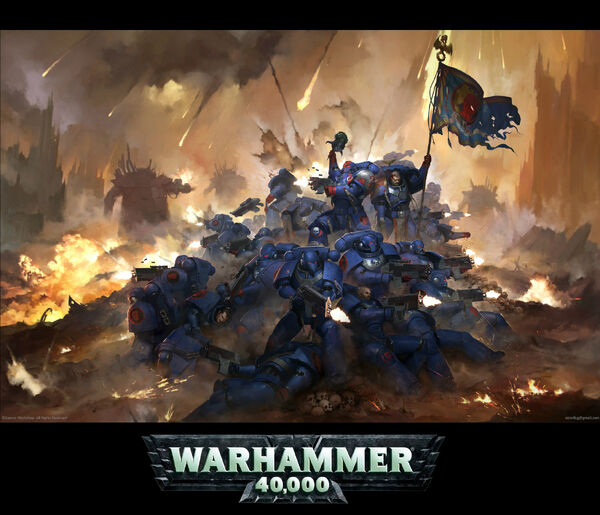 Warhammer 40,000 is a tabletop miniature wargame designed and produced by Games Workshop. Originally released in 1987 as Warhammer 40,000: Rogue Trader, it has been re-released in various editions in the years since then and developed further and further past its original premise as a science-fiction supplement to Warhammer Fantasy.

Beset on all sides by the alien and by the heretic, the Imperium of Man is crumbling. It is but a shadow of what it once was, a glorious, shining bastion of humanity, standing strong, but it has degraded. The Imperium's God-Emperor sits as a rotting shell on the Golden Throne, kept alive only by the constant sacrifices of thousands. Barely alive, he is forced to watch as the Imperium is beset on all sides by countless xenos, and worst of all, the traitorous legions that were once his sons. The Imperium's borders are protected by the Imperial Guard, and the Emperor's greatest soldiers, the superhuman mutants known as the Adeptus Astartes, or the Space Marines. Humanity barely pulls through, day after day, and even as the Emperor rots on his throne, his consciousness keeps back the Chaos Gods in the Warp, preventing them from bleeding over into realspace and consuming all of reality.

Warhammer 40,000 is an incredibly impressive series, standing as a one of the most powerful Science-Fiction universes out there. The Imperium of Man showcases technology far above that of modern times, with even baseline weaponry such as Lasguns and Bolters being capable of vaporizing chunks of stone, or turning humans to bloody mist with single shots. Among more advanced weaponry are the Plasma Weapons, which fire blasts of concentrated plasma carrying the heat of the sun's core, as well as Melta Weapons and Conversion Beamers, both of which destroy their target on a sub-atomic level. And even these weapons are outclassed by the firepower employed by Macrocannons, Super-heavy tanks, and Mechs such as the Imperial Knights and Titans. Even more impressive are the Imperium's Warships, which can crack and burn whole continents, and atomize oceans with single shots, with the strongest ships being well within the Planet-busting potency.

It is worth nothing that within the wider universe of Warhammer 40,000, the Imperium of Man is considered to be a degraded, withered shell of its former self, boasting outdated technology that is inferior to that wielded by Xenos species such as the Aeldari, the T'au, and especially the Necrons, who possess technology that can manipulate the very fundamental forces of the universe, destroy planets and stars, and reality-warp entire systems and beyond.

The Imperium of Man's vast dominion is defended by its unfathomably huge military prowess, chief of which is the Astra Militarum, also known as the Imperial Guard, a galactic-wide army of trillions that often defeat their enemies through sheer numbers. Numerous other forces stand alongside them, but doubtlessly the Imperium's greatest military asset are the genetically-engineered Supersoldiers of the Adeptus Astartes. A typical Astartes possesses enough strength to effortlessly shatter every bone in a human's body with a swing of his arm, push 30 Ton tanks, topple a large stone tower, etc. And with their Power Armour they can endure multi-kilometer falls, tank grenade explosions, and survive Heavy-bolter and cannon shells. And despite their huge bulk, Astartes are preternaturally fast, moving faster than human perception, and capable of reacting to Hypersonic Bolter shells with ease. And even such warriors are no better than children next to Astartes in Terminator Armour, who possess the strength and durability of tank, and they are in turn outclassed by Astartes Dreadnoughts.

It is also worth nothing that is far from the full potential of a Space Marine, as named and important Astartes character often showcase truly absurd feats, such as enduring the fire of re-entry, surviving nuclear explosions at point-blank, defeating Terminator Marines on melee, doing greater damage with their punches than them with their Plasma and Melta weapons, both processing information and reacting in timeframes of Microseconds and Nanoseconds, or even doing battle with Daemon Princes and Greater Daemons (More on them later).

The series also possesses multiple fantasy elements, and is not strictly science-fiction. There are numerous beings with magical and psionic powers in 40K, known as Psykers. Those with Psychic Powers can distort and manipulate reality around them in a variety of ways, such as through telekinetic and telepathic abilities, firing psychic fire and lightning, manipulating matter on a atomic level, controling the minds and souls of their enemies, or even distorting the very very fabric of space-time, among numerous other abilities. Sufficiently powerful Psykers can lay waste to mountain ranges, and the strongest Psykers - Those of Alpha and Alpha Plus class - can easily destroy whole worlds or even warp entire solar systems with their powers. The most powerful Psyker in the series, The Emperor of Mankind, could unleash blasts of psychic power more destructive than Supernovas while dismembered and in a near-death state.

There are a great number of antagonistic forces in the Warhammer 40,000 universe, but the most important and powerful of them is, without a doubt, Chaos. Existing within the Warp, an infinite-dimensional realm of concepts and thoughts which is anathema to space, time, matter, laws, and everything that composes our universe, the Four Gods of Chaos embody the prime principles of reality and unreality itself, and seek to consume all existence. They are heralded by their endless legions of Daemons, eldritch horrors created from the thoughts, emotions and beliefs of mortal beings. The most powerful of these daemons showcase truly nightmarish power, such as cracking continents just by being summoned, setting planets on fire and splitting them in half, merging with planets and surviving their violent destruction, consuming and shattering suns, or even reality-warping structures on the scale of whole Solar Systems.

The Imperium of Man