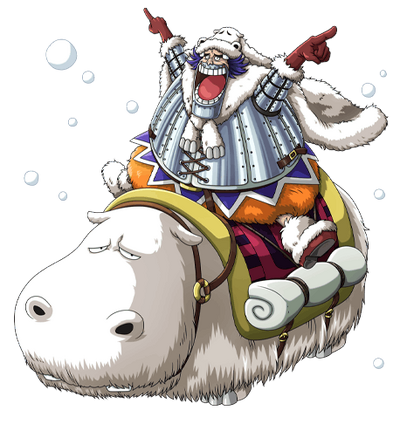 Powers and Abilities: Superhuman Physical Characteristics, Metal Manipulation, Transmutation, Weapon Mastery (able to use a large variety of different weapons) and Creation (His Devil Fruit powers allows him to create weapons from the material he previously ate), Explosion Manipulation (With cannons)

Range: Several meters depending on circumstance

Intelligence: At least Average (He was spoiled as a child. His tactical ability is noticeable. However, he has the capability to utilize his Devil Fruit in some creative ways, such as fusing two of his subordinates together so that they'd be stronger and pose a threat to Chopper)

Weaknesses: As a Devil Fruit user, Wapol becomes weak when submerged waist-deep in water. He becomes incapacitated if almost completely submerged. Selfish, may underestimate his opponents

Retrieved from "https://vsbattles.fandom.com/wiki/Wapol?oldid=4598674"
Community content is available under CC-BY-SA unless otherwise noted.