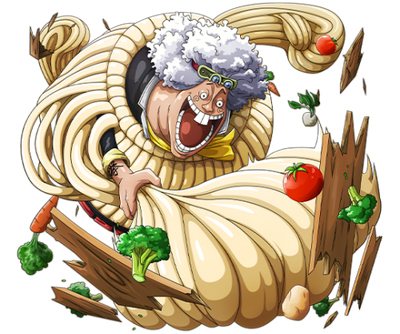 Wanze is a member of the CP7 and a cook, specializing in making ramen noodles, introduced as an antagonist in the Enies Lobby arc. He's a man that takes pride in his abilities and appears to be quite confident in them, though he can be a bit dense and short tempered. One of the main attribute to Wanze is that his facial expression seems to never change, even when he claims to be scared, which often lead to the annoyance and irritation of his enemies.

As a chef, Wanze specialized in ramen, and can make ramen noodles by eating flour and using his nose hairs to cut it, something everyone who sees this finds utterly disgusting and refuses to eat it.

Like other One Piece's characters, Wanze has his own signature laughter style, starting it off with "Sa" (i.e. Sasasasasasa!).

Stamina: High (took many attacks from Sanji and kept fighting even after having his face totally rearranged).

Range: Extended melee range with Ramen Armor, up to tens of meters with Ramen Beam

Standard Equipment: Bags of flour and rollar skates. He also ultilizes a large poisonous knife that seem to be a bit corrosive.

Intelligence: Above average. He is quite analytical, as he was able to figure out the weakness of Sanji’s fighting style (in that immobilizing his legs makes him powerless) after fighting with him for only a few minutes. He tends to act in a whimsical or uncontrolled manner with his ‘dumb’ smile ever so present to mislead his enemies into underestimating him which is a grave mistake, since he is a powerful melee fighting expert with incredible reflexes. He is also a member of the CP7, an intelligence agency working under the employ of the World Government, and considering that he is their "ace", this speak well for his level of intelligence to handle such responsibilities.

Weaknesses: His Ra-men Uniform doesn't cover Wanze's head. He oddly becomes dizzy when he sees spirals, such as Sanji's eyebrow.

Ramen Kenpo: Wanze is an expert in Ramen Kenpo, a martial art that use Ramen to enhance his power. Most of his attacks consists on Wanze putting flour on his mouth to knead it inside of it and extrude it out of his nose as ramen.