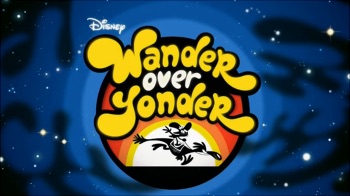 Wander over Yonder is an animated series on Disney XD created by Craig McCracken (also known for creating The Powerpuff Girls and Foster's Home for Imaginary Friends). It's about Wander, a furry, orange, muppet-like creature with a banjo, trying to help everyone and make them happy while also defeating the evil conquerer of planets (such as those like Lord Hater (technically Wander tries to be friends with him which annoys him)) while Sylvia (a horse and/or dragon-like creature called a Zbornak), Wander's faithful steed and best friend, beats up the watchdogs, who are Lord Hater's minions.

To know more about the show, see the WoY wikia here.

The power of the verse is very strong, containing some characters in the range of planet busting and Sub-Relativistic to even FTL+ speeds. There are ships, like Lord Hater's, that can destroy planets and (possibly) even stars: https://www.youtube.com/watch?v=AteBFcLjvJw (skip to 0:38).

Characters like Major Threat who can easily destroy multiple planets with his telekinesis alone, Hater who can punch a person and make them go flying through a planet. Awesome who is known for being a planetary destroyer due to his raging parties(yes, his parties are so destructive they really cause planets to be destroyed as a result), Buster who is literally a giant dog that can casually destroy planets by chewing on them, and the big bad herself Lord Dominator who is evenly matched with Lord Hater in terms of power, are what makes this verse strong.

In terms of hax, there isn't really much of it known but it should be noted regardless. There is the Black Cube of Darkness who can steal a person's soul by simply making eye contact and speaking in Latin (though the downside to that is he has to look at them for a certain amount of time in order for the trick to be done). The same thing could be said for Lil' Bits who possess the power to control one's mind/soul via the same thing as Black Cube's but through cuteness (though unlike the Black Cube, Lil' Bits powers actually could be transmitted through cameras and has the potential of even affecting anybody on a planetary scale)...

Overall, this is a verse you don't want to underestimate despite how it presents itself.

Supporters and Opponents of the verse

Start a Discussion Discussions about Wander Over Yonder