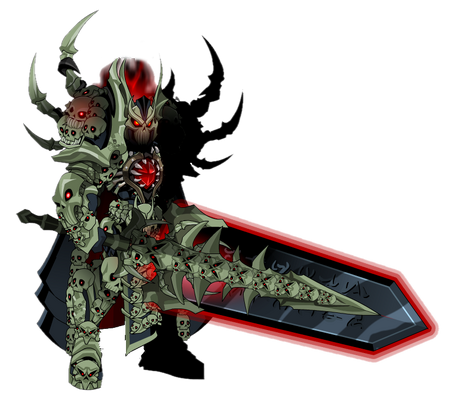 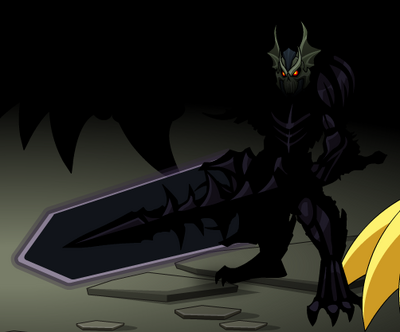 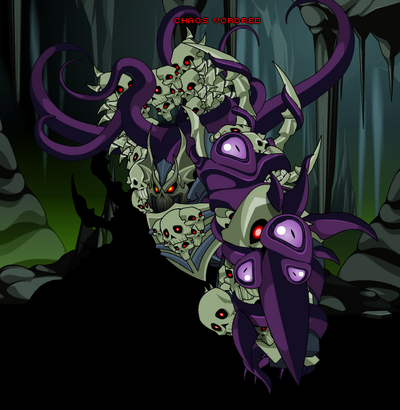 Vordred is a DeathKnight who is known as the 'Paladin Slayer' and is the main antagonist of the Doomwood storyline. Vordred was created through necromancy by Sally and Noxus using an ancient evil found in the Necropolis as a base, and was tasked to slay Artix and gain his status as the Champion of Darkness which would grant him the title as the most powerful darkness creature on Lore.

Powers and Abilities: Superhuman Physical Characteristics, Magic, Energy Manipulation, Earth Manipulation, Regeneration (At least Mid, Mid-High with the aid of Sally), Soul Manipulation, Sword and Axe Mastery, Darkness Manipulation, Life Manipulation (Can transfer his life-force to his shadow), Immortality (Types 1, 2, 7, and 8. Can transfer his life force to his shadow and is supposedly unable to die unless both him and his physical self and his shadow are defeated simultaneously. Type 4 with the aid of Sally), Telekinesis, Rage Power, Non-Physical Interaction, Bone Manipulation, Corruption (Type 2. Corrupted the Blinding Light of Destiny, transforming it into the Shadowreaper of Doom), Extrasensory Perception (Is able to detect the presence of souls), Death Manipulation with Voiduminance Necrot-Morph, Power Absorption, Soul Absorption (Absorbed all ten million spirit orbs). Resistance to Mind Manipulation (Possesses enough power to the degree in which his master was unable to put him under control. Unaffected by ArcAttack's effort to inflict complete psychic annihilation), Light Manipulation (Vordred is so attuned to the Plane of Darkness that he is immune to all powers of light, although this revealed to be due to his protective layer of skulls), Soul Manipulation (Completely unscathed by an attack from Ultimate Dragon Soul Spear of Ten Million Spirit Orbs which involve the souls of ten million individuals gathered by Artix), Magnetism Manipulation, Sound Manipulation, Energy Manipulation, and Electricity Manipulation (ArcAttack's efforts to amplify energy with sounds and magnetic fields could not affect Vordred even when amplified to a degree that could no longer maintain life) | All previous, limited Resistance to Power Nullification (Chaos powers are unable to be removed or cancelled), Large Size (Type 0)

Attack Potency: At least Town level (Stronger than base Artix but was overwhelmed by Artix's shadow and easily destroyed by Drakath) | Unknown (Supposedly more powerful than previously, but was easily defeated by Sepulchure before showing his true degree of strength)

Speed: FTL (Comparable to Artix and the Hero) | Unknown

Lifting Strength: At least Superhuman (Can swing a giant sword and ax with ease) | Unknown

Retrieved from "https://vsbattles.fandom.com/wiki/Vordred?oldid=6137145"
Community content is available under CC-BY-SA unless otherwise noted.