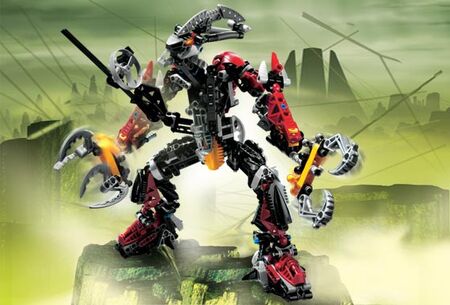 Voporak is a servant of the Dark Hunters. Originally a clan leader on Stelt, he was selected by Stelt's Makuta for experimentation and was mutated, turning him into a time-sensitive being. The Makuta of Stelt lent him to the Dark Hunters to learn discipline, but he became loyal to the Shadowed One, and not the Brotherhood of Makuta.

Powers and Abilities: Superhuman Physical Characteristics, Fighting Mastery, Extrasensory Perception (He can sense fluctuations in time and track down other sources that affect time), Time Manipulation (Can give off a temporal forcefield that rapidly, unnaturally ages others), Energy Manipulation (Can create a Rhotuka, a wheel of energy), Perception Manipulation with his Rhotuka (Can knock a victim's perception of time back by a few seconds), Longevity

Attack Potency: Island level (While Voporak doesn't rely on physical power, his power was so great that Vakama initially mistook him for Teridax, and he believed their fight could potentially destroy Metru Nui), can ignore conventional durability through age acceleration.

Durability: Island level. His age acceleration field makes it hard to harm him.

Stamina: Extremely high. Voporak's stamina should be comparable to that of Toa, and the Toa Mangai fought against the Kanohi Dragon for an entire month.

Intelligence: Voporak is a skilled combatant.

Time: Due to his mutations, Voporak is time-sensitive and has some degree of control over time. He can give off a temporal forcefield that rapidly ages those within, and he can also do this through touch; it was able to age The Shadowed One by three thousand years in just a few seconds, and reduced droves of Rahkshi to dust as they attacked him. This effects even energy and elemental projectiles. He can also sense fluctuations in the fabric of time, which allows him to track the Legendary Mask of Time.

Retrieved from "https://vsbattles.fandom.com/wiki/Voporak?oldid=6520534"
Community content is available under CC-BY-SA unless otherwise noted.