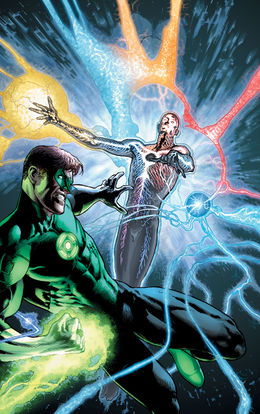 Given power by the Guardians of the Universe, the mysterious First Lantern was locked away and guarded by another group of the Guardians' species, after his powers were determined to be too great and dangerous. The Guardians used his powers to help create the Third Army.

Age: Unknown, Volthoom is born in the future of Earth-15 in the years 3079

Attack Potency: At least Solar System level (Should be superior to New 52 Mogo and other Lanterns) | Low Multiverse level (Superior to Parallax Sinestro. Was going to remake the entire universe)

Retrieved from "https://vsbattles.fandom.com/wiki/Volthoom_(DC_Comics)?oldid=5485706"
Community content is available under CC-BY-SA unless otherwise noted.