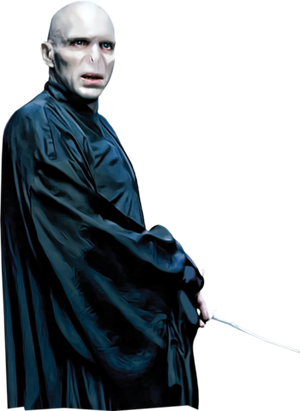 Tom Marvolo Riddle, better known as Voldemort, or He-Who-Must-Not-Be-Named, is the leader of the Death Eaters and considered by many to be the greatest Dark Wizard of all time. Born through the use of a Love Potion and descended from Salazar Slytherin, Voldemort used his immense power and cunning to gather an army of wizards and dark creatures, the Death Eaters, with which he could overthrow the Ministry of Magic and exercise his monstrous desires as he pleased.

This all ended when he attempted to kill Harry Potter, a boy a prophecy foretold could one day defeat him. When the infant's mother sacrificed her life in his protection, Voldemort's Killing Curse backfired and forced him out of his body. He survived only thanks to his Horcruxes, having split his soul seven times to make himself immortal, but only as a phantom, a shell of his former self. But he persisted, and slowly took the long road to regaining his old body and power...

Tier: 9-B. High 8-C with regular spells, 8-A with more powerful spells

Powers and Abilities: Superhuman Physical Characteristics, Genius Intelligence (He's a master of the Dark Arts and an experienced potioneer), Magic, Flight, Forcefield Creation, Limited Animal Manipulation (As a Parseltongue, he can control snakes, even the Basilisk), Curse Manipulation, Death Manipulation (The Killing Curse induces a supernatural death in anything it hits), Fire Manipulation, Memory Manipulation (He can implant false memories into the minds of others), Metal Manipulation (Created a replacement silver hand for Pettigrew and produced a silver shield in his fight with Dumbledore), Mind Manipulation (He can control the minds of others with the Imperius Curse, and can influence, control, and unhinge the minds of others through Legilimency), Pain Manipulation (The Cruciatus Curse can be used to subject victims to torturous pain), Invisibility, Necromancy, Telekinesis, Telepathy (He can invade the minds of others and read their memories and thoughts with Legilimency), Teleportation, Transmutation (He can transform projectiles and elemental attacks into snakes), Resistance to Mind Manipulation (Occlumency allows him to protect his mind from mental attack and invasion), Possession, Minor Fate Manipulation (After being denied the post of Defense Against the Dark Arts, Voldemort cursed the position so that anyone who took the job lasted no longer than a year), Immortality (Types 2, 6, and 8; reliant on his Horcruxes), Regeneration (Up to Low-Godly with potions; the Regeneration Potion was able to create him a new body after his soul was ripped from his original one)

Attack Potency: Wall level (He should be at least physically comparable to Harry, who deflected a bludger when he was only 11 years old). Large Building level with regular spells (His power rivals Dumbledore, whose Firestorm is this strong, and he split the Brockdale Bridge in two. He's performed spells that not even Dumbledore would dare to cast, such as Fiendfyre, which is certainly stronger than Firestorm. Capable of creating lightning. Considered to be the most powerful Dark Wizard of all-time, making him superior to Gellert Grindelwald. Created a shockwave that damaged the Atrium in his fight against Dumbledore), Multi-City Block level with more powerful spells (He destroyed Hogwarts' forcefield with a wand that rejected him and after having most of his Horcruxes destroyed, though the effort exhausted him). Several of his spells ignore conventional durability.

Speed: Athletic Human with Subsonic reactions and flight speed (He can keep up with other Wizards in duels, and many of them can maneuver their brooms while in high-speed flight, with brooms as fast as the Firebolt, and track objects as small and swift as the Golden Snitch. Can fly this fast)

Lifting Strength: Athletic Human, Class 5 to Class 10 with telekinesis (He can move giants and bring down cable towers, and should be at least comparable to Grindelwald, who can hurl cars).

Range: Hundreds of meters with magic, Tens of kilometers with Apparition

Standard Equipment: His wand, and eventually the Elder Wand.

Intelligence: Genius. Voldemort is considered to be the most powerful, skilled, and dangerous Dark Wizard to have ever lived, surpassing even Grindelwald, and Albus Dumbledore was the only wizard considered to be superior to Voldemort. He was able to mastermind two of the most destructive wars in British wizarding history, effortlessly overwhelming the entirety of the British wizarding community. He was a child prodigy at magic, exerting perfect control over his powers even without any knowledge or training and without a wand, and later on was stated by Dumbledore himself to be the most talented and brilliant student to have ever attended Hogwarts, achieving an 'Outstanding' on all of his O.W.L and N.E.W.T exams. As an adult, Voldemort traveled the world and became a tremendously powerful wizard of unmatched skill. He performed feats of magic thought to be impossible and his accomplishments completely eclipsed any Dark Wizard that came before him. His magical prowess was so great that Dumbledore himself admitted that even the most powerful protective charms and spells couldn't keep him out if he was at full power, and the combined efforts of all the professors in Hogwarts could not hold Voldemort off for long. Voldemort was extremely talented at every single branch of magic, be it potions, transfiguration, or charms. His greatest affinity however was the Dark Arts, and he managed to push the boundaries further than any other wizard to have ever lived. He is the only known wizard to have successfully created not one, but seven different Horcruxes, a feat that both astonished and disgusted many other powerful wizards. He was also the only wizard capable of necromancy, and was capable of implementing several powerful defenses for each of his horcruxes, one of which was a curse that was so powerful it would have killed Dumbledore in minutes had Snape not intervened. Voldemort was highly adept with the three unforgivable curses; his affinity with the Killing Curse was so great that he managed to kill enough people to possess an army of Inferi, and his Cruciatus Curse was strong enough to break through a powerful memory charm while his Imperius was strong enough to control someone for over half a year. Voldemort also invented the ability to fly, defying the law of magic that stated objects can only fly with a charm. Outside of magic, Voldemort was also considered to be extraordinarily charismatic, gaining the trust and admiration of everyone in Hogwarts except for Dumbledore himself, and manipulated several people including his teachers. He successfully convinced Quirrell to serve him despite him holding but a fraction of his original power, earned Ginny Weasley's trust, and successfully framed Hagrid and Aragog for the murder of Myrtle. With his charisma, he was a highly successful salesman, being the best employee Borgin and Burkes ever hired, and with his encyclopedic knowledge of magical artifacts, procured several priceless treaures that he would turn into Horcruxes. Voldemort was a born leader, and even before he left Hogwarts he was already in command of a group of 'friends' that would later be known as the Death Eaters, and with less than forty of them, nearly dominated the entire population of magical Britain in the first wizarding war. Despite his incredible ingenuity at virtually every aspect of magic, his extreme arrogance and megalomania would usually hamper his intellect.

Weaknesses: Voldemort is extremely arrogant and sadistic. He has a number of exploitable idiosyncrasies, such as an obsession with magical artifacts, places significant to him, and the number seven. He has no understanding of love, which makes it hard for him to read the minds of others while they are feeling it and often leads to him failing to understand others. He is obsessively afraid of death, and will be reduced to a fraction of his former strength in a spiritual form if his body is destroyed while his Horcruxes remain; if all of them are destroyed, he can be killed for good. When he does acquire the Elder Wand, it does not acknowledge Voldemort as its true master and thus cannot be used effectively. His arrogance often leads to him making idiotic tactical decisions.

- Dark Arts: Voldemort is a master of the Dark Arts, considered by many to be the greatest Dark Wizard to have ever lived and possessing extensive knowledge of curses and other sinister spells that even Albus Dumbledore would hesitate to perform. His curses can be so powerful as to bring about the deaths of those who trigger them, causing Dumbledore's health to fail after he put on Marvolo Gaunt's ring and was exposed to the curse and nearly killing him instantly, and even a jinx cast on the position of Defence Against the Dark Arts at Hogwarts was a spell that Dumbledore could not reverse.