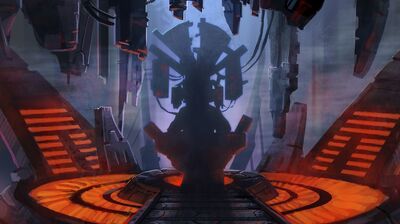 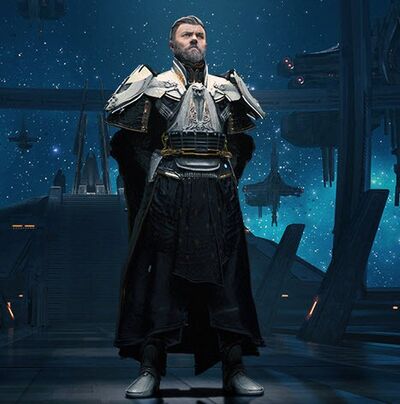 Vitiate was the Emperor of the Sith for over a millennium during the Old Republic era, reconstructing it after the Great Hyperspace War.

Born to farmers on the planet Medriass in 5113 BBY, Tenebrae was always unnatural, having eyes as black as space and never displaying emotion. At the mere age of six, Tenebrae developed Force powers and learned that his true father was the ruler of Medriass, Sith Lord Dramath. By the time he was ten, Tenebrae faced and killed his father, declaring himself ruler of the planet in the next three years and renaming it Nathema. By then, in 5100 BBY, he encountered Dark Lord of the Sith Marka Ragnos and was given the Sith title of Vitiate.

Over a century later, in the wake of the Great Hyperspace War, Vitiate called 8,000 Sith Lords to Nathema with the promise of revealing Dark Side power greater than anyone could imagine. However, the ritual killed every Sith Lord—and every lifeform on the planet—and transformed Vitiate into a supremely powerful Dark Side entity. Leading the surviving Sith in a nineteen years odyssey to the Unknown Regions, he established a new Sith Empire on Dromund Kaas, and declared himself the Sith Emperor.

Simultaneously, Vitiate traveled to Wild Space in search of the supposedly unstoppable Eternal Fleet. Finding the world of Zakuul, Vitiate hid among them as a man known as Valkorion. Over an unknown period of time, he united the nomadic tribes into one Eternal Empire utterly devoted to him. While there, he would also have a relation with a Zakuulan named Senya Tirall and have three children: Arcann, Vaylin and Thexan.

Attack Potency: Planet level (Even at the age of 13, Vitiate's power was so great Marka Ragnos himself acknowledged it and immediately granted him the title of Sith Lord) | Solar System level (Referred to as an "avatar of the Dark Side", "the most powerful Force user who has ever existed" and "the Dark Side incarnate", being the most powerful Sith in all of history. As such, he should be significantly superior to the Valley of The Jedi, Naga Sadow with the Sith Meditation Sphere, Brakiss, and Wutzek), Galaxy level via Nathemic Ritual (Would reproduce the Ritual of Nathema on a Galactic Scale, destroying it completely )

Lifting Strength: Peak Human naturally, can be augmented to Superhuman levels with Force Amplification (Should be superior to the likes of Darth Traya and Sion)

Stamina: Very high (Can duel the Hero of Tython for extended periods of time and can drain entire populations of their life energy even while weakened as an incorporeal being)

Range: Extended melee range with his lightsaber. Galactic with Force powers (Capable of contacting and taking command of individuals from all across the galaxy)

Intelligence: A militaristic and political genius; manipulated Revan and Malak, both famed war heroes and generals of the Mandalorian Wars into being his pawns; preyed off the weaknesses and fears of over a hundred powerful Dark Lords of the Sith after the Golden Age of the Sith Empire was past and Naga Sadow’s defeat in the Hyperspace Wars to lure them to his home planet and devour them with his Sith sorcery to become immortal and increase his own power; also sent Revan and Malak as the vanguard of his invasion before the former’s redemption to the Light Side/Jedi Order, still using him to give him information on the Old Republic capabilities as well as the state of the Jedi Order; attacking over three centuries after the Sith Triumvirate’s defeat in the second Jedi Civil War; also manipulates and plays off the political scheming of the Sith Dark Council so he can continue his unknown research after the Cold War began.

Weaknesses: Vitiate fears death and will go to any length to prevent it, and lacks particular skill with a lightsaber compared to other duelists of his caliber due to preferring the use of his Force powers in combat 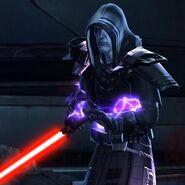 One of Vitiate's many voices, used when confronting the Hero of Tython. 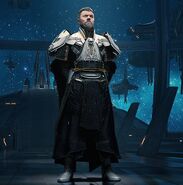 Vitiate observing a space battle between Republic and Imperial forces during the Great War.
Add a photo to this gallery