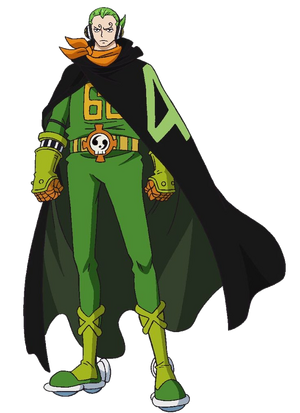 "Winch Green" Vinsmoke Yonji is the fourth son and youngest child of the Vinsmoke Family, making him both a prince of the Germa Kingdom and a commander in its military arm, Germa 66.

Powers and Abilities: Superhuman Physical Characteristics, Skilled Hand to Hand Combatant, Pseudo-Flight with his boots, Regeneration (Mid-Low, Vinsmoke's siblings have an amazing healing factor as they are able to heal bullet wounds in some hours), Resistance to Fire (with his Raid-Gear Equip) and Blunt Force Trauma (Due to the tension of his skin)

Attack Potency: Mountain level (Comparable to Niji and Sanji but to a severely lesser extent)

Speed: At least Massively Hypersonic+ (Should be comparable to Niji)

Durability: Mountain level (Took an assault from Sanji but was left severely deformed in the face)

Intelligence: As a member of the Vinsmoke family, Yonji is an expert assassin and a skilled military commander. In addition, he is an expert hand-to-hand combatant.

Weaknesses: Unwilling to help those in need. Very callous and stingy person