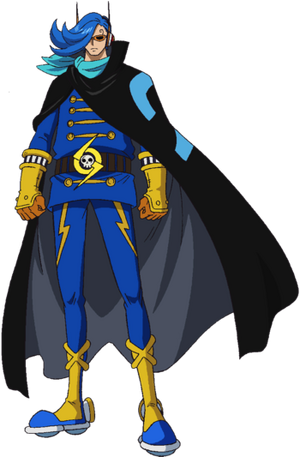 Electric Blue Vinsmoke Niji is the 2nd son of the Vinsmoke Family. Like the rest of his family, he is proud of his royal status and does not care for his servants.

Powers and Abilities: Superhuman Physical Characteristics, Expert Hand-to-Hand Combatant, Has knowledge of Swordplay, Pseudo-Flight with his boots, Electricity Manipulation (Can electrify parts of his body), Regeneration (Mid-Low, Vinsmoke's siblings have an amazing healing factor as they are able to heal bullet wounds in some hours), Resistance to Fire Manipulation (With his Raid-Gear Equip) and Blunt Force Trauma (Due to the tension of his skin)

Attack Potency: Mountain level (Knocked Sanji out with two strikes without his Raid-suit)

Speed: At least Massively Hypersonic+ (Should be comparable if not superior to Vinsmoke Yonji), likely higher with Stealth (Got behind Sanji before the latter could notice)

Durability: Mountain level (Took a kick from Sanji and got back up soon afterwards)

Stamina: High (Fought an entire war in four hours and didn't seem tired in the least)

Intelligence: As a member of the Vinsmoke family, Niji is an expert assassin and a skilled military commander, ending a two-year long war in four hours with no apparent effort on his part. He's an expert hand-to-hand combatant, easily overpowering Sanji with little resistance on the latter's part. He has a superhuman memory and can imitate any voice, possibly due to his genetic modifications.

Weaknesses: Niji is extremely arrogant and proud of his status as a noble, looking down on "peasants" and rarely taking them seriously