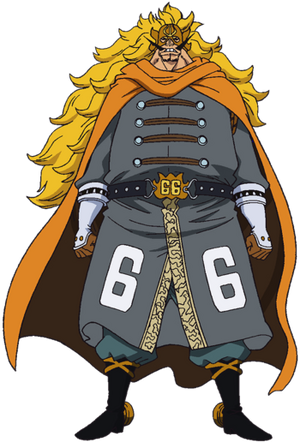 Vinsmoke Judge, also known as Garuda, is the king of the Germa Kingdom, the supreme commander of the Germa 66, and the patriarch of the Vinsmoke Family. He is also a skilled scientist, and a former research partner to the leading World Government scientist Vegapunk.

Speed: At least Massively Hypersonic+ (Capable of keeping up with Sanji)

Standard Equipment: Wields a spear. He also possesses the Vinsmoke Family's advanced technology, which he has used to modify both his spear, boots and gauntlets, along with other pieces of armor

Intelligence: Extraordinary Genius. Using his strategic mind he single handedly defeated 4 other kingdoms and was research partner of the World Government Scientist Vegapunk. Came up with a way to perfectly genetically clone soldiers with superhuman strength and absolute loyalty towards the Germa Kingdom